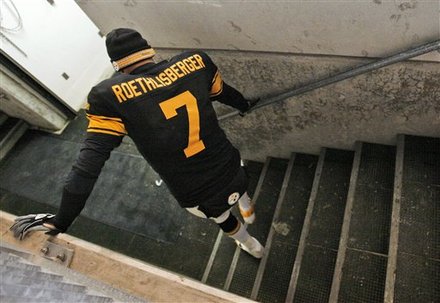 The Steelers need to keep winning if they are going to find a way to overcome the Ravens to take the AFC North. The best chance to do that is to get their quarterback and center back in the lineup for Monday’s game against the 49ers.

Now for the big question – can they?

Ben Roethlisberger had a walking boot and was walking with a a pronounced limp at Steelers headquarters Monday. Center Maurkice Pouncey sustained a high-ankle sprain last Thursday night in the Steelers win over the Browns.

Yet it appears that both as of today are going to take the field on the left coast Monday night in yet another must win for the black and gold.

Pouncey has already said he will play Monday night, and while nothing has been said by the team, it appears in the locker room as if they feel Roethlisberger will play as well.

“We’re both fine,” said Pouncey, in Tuesday’s ibune-Review. “We’ll be all right to go on Monday Night Football.”

It could be a smoke-screen for the Niners, who likely have a much better shot at winning if both Ben and Pouncey can’t go.

Charlie Batch looked rusty in his time in the game on Thursday, and Roethlisberger is having one of, if not his best season as the Steelers starting QB.

When asked if he expects to see Roethlisberger on the field Monday against the Niners, linebacker James Farrior said, “Yeah, if I had to guess. He’s a gritty competitor, and he wants to play and wants to win. He knows he gives this team the best chance to win.”

Said wide receiver Hines Ward, “Hopefully him coming back (against the Browns) doesn’t jeopardize him losing any more games from this point on. Me knowing Ben, he’ll be out there competing and fighting his tail off just to be out there.”

Pouncey missed Super Bowl XLV with a ankle sprain, but already says he is feeling better and that the ankle is healing faster than a year ago.

“It’s a lot better that I hurt it last year, so now it can heal a lot quicker,” said Pouncey, who didn’t practice yesterday. “It’s not as swelled up, and I can do a little bit of something on it. It just needs the right rest and right rehab. I feel good.”

Hopefully for both he and Roethlisberger, it’s good enough to take the field in San Fran to get a win.