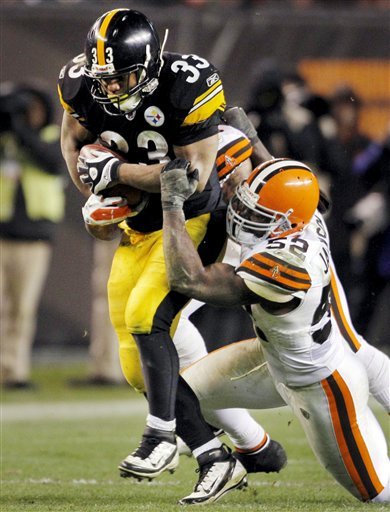 The Steelers are going to get a first hand look at Tim Tebow and the Broncos.

Sunday the team got a dose of bad news twice, but in the end it’s a route they have had to take before to get to the promise land of playing for another Lombardi.

The team took care of the inept Cleveland Browns 13-9 on a wet and windy day in Cleveland. That was the good news.

The Ravens won in Cincy 24-16 after going up big early. That means at 12-4 they are the AFC North champs since they beat the Steelers twice, and they will get a week off.

Add to that the team lost running back Rashard Mendenhall with a knee injury, that Mike Tomlin said after the game is almost surly going to keep him out of the wild card game in Denver.

So the team at 12-4 will go into Denver next weekend with Issac Redmen, who did a lot good Sunday, John Clay, and possibly Mewelde Moore as the three running backs. They also will have a QB still limping around the locker room, and a LB that hasn’t played much since around Halloween.

Other than that, the Steelers are once again playoff bound.

Redman scored on a 7-yard run in the third quarter for the Steelers, and ended the day with 92 yards on 19 carries. He did put the ball on the ground twice in the final quarter, but the Browns offense is so bad, they did little with the chances they had.

Ben Roethlisberger passed for 221 yards on a severely sprained ankle, going 23-for-40 for 221 yards. He did hit some big throws in a driving rain and some snow.

“I hate it,” Ben laughed about weather in Northeast Ohio.

It may not be much better in Denver, where it’s been known to snow a little bit in the winter. If the weather gets bad, it could actually help the Broncos, who had just six passes completed Sunday in their home loss.

The defense was the story on Sunday in Cleveland, and it looks like if the Steelers are going to make a serious run at the Super Bowl, they will need to lean on them to get them there.