Roethlisberger On New Unis, Ward, Leadership Within the Steelers 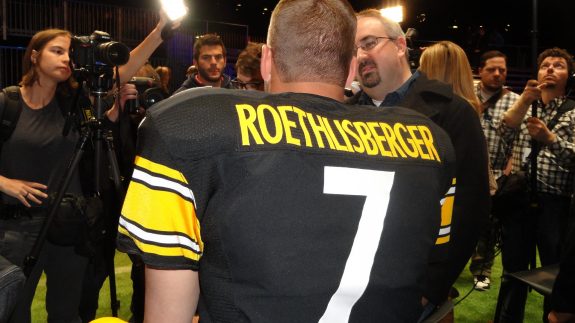 Ben Roethlisberger has always been the center of attention in the Steel City, and Tuesday in New York City he along with 31 other NFL players were on hand to debut their teams new Nike NFL uniforms.

While the Steelers uni didn’t change much, Ben said that he liked the fact it’s a little lighter than that of the old Reebok unis.

“It’s a lot lighter and more comfortable in games, so late in games your going to feel like your not wearing anything,” Roethlisberger said.

The Steelers franchise QB talked about not being able to do much so far with new OC Todd Haley, and also said he would have hoped to have been able to meet and chat with the former Chiefs HC by now.

“You could be a lot busier if you could meet with him and talk to him,” Roethlisberger said. “If you have someone new come in I think you should be able to meet early.”

As far as the chatter that there was bad blood between he and the team about the dismissal of close friend, former OC Bruce Arians, Roethlisberger said it’s all hype.

“Way overblown, there’s nothing to that,” Roethlisberger said.

Another big topic in Steeler Nation has been Hines Ward, and his sudden announcement that he would retire, this after he said he wanted to continue playing, even if it was with another club.

Ward walked away two weeks ago, staying within the Steelers organization his whole career, walking away with 1000 career catches.

Roethlisberger says the retirement did surprise him a bit.

“I guess I was because of how he said he wanted to play,” Roethlisberger said. “Only you know your own body, so he knows his body and his health better than anybody, so when he said that I thought he was really gonna go somewhere and play. I was a little surprised by it, but not disappointed by it since he was gonna go out as a Steeler.”

“There’s a lot of behind the scenes things that we don’t even know about,” Roethlisberger said. “Whether it was a money issue, or a health issue, who knows.

“I went through this a little bit with Jerome when he left, so when you lose an iconic figure like that, you never want to see him go, but everyone’s got to go at some point.”

As far as stepping up and being a leader, he said that not only is it going to be on him, but also on the rest of the young players of the Steelers to start to lead by example, and show the rookies and first 2-3 year players how it’s done.

“I have become the oldest guy on offense and the oldest guy in the locker room, it’s kind of one of those things I’ll do my best to try and be a leader,” Roethlisberger said. “We’ve got some other guys that can do it, but it’s time for some of those younger guys to step up.”