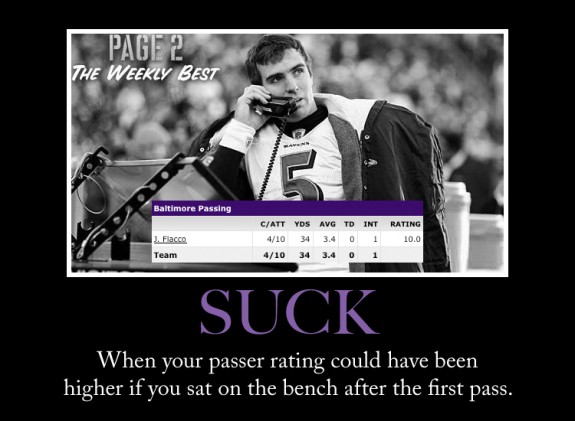 For those in Steeler land that want to start their Wednesday with a good hearty laugh as you get to your desk, check out what Joe Flacco had to say about himself yesterday to WNST 1570 in Baltimore.

Again, get ready to laugh.

Yes, this is not a misprint. The same guy who threw away the AFC Divisional Title game in Pittsburgh two seasons ago, and couldn’t find a way to beat one of the worst defenses this past year in the AFC Title game in New England is proclaiming himself as the leagues best QB.

If you do a little exam of the AFC North, you’d be hard pressed to legit put Flacco ahead of Ben Roethlisberger, and right now, Andy Dalton of the Bengals is moving up the charts fast.

The comments are really interesting based on the fact this past year his completion percentage, passing yards and touchdowns all went down from the season before, and he threw two more interceptions than he did in 2010.

Just like the Ravens usually do, they try and talk the talk, but when it comes time to put up or shut up, they can’t do it. Flacco is just the latest of many in Baltimore to get diarrhea of the mouth when he really should be worried about the 2012 season and the Steelers and Bengals.