Stewart Comes Back to Pittsburgh to Retire a Steeler 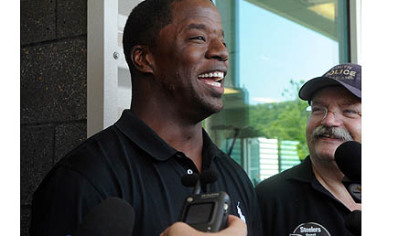 Kordell Stewart, known as “Slash” in his early days, returned to the Steel City Wednesday to announce his retirement.

He always wanted to do it as a Steeler, and was able to get it done the way he wanted, just like one of his old WR’s – Hines Ward.

“It’s not closure in a negative way, it’s closure in a positive way … I had a great time doing it. It’s about the experience.”

Stewart, who is now 39, played his first eight seasons in Pittsburgh, making a splash as “Slash” in 1996 while helping the team to the Super Bowl before beginning an enigmatic career at quarterback.

“This where it all started, this where all my success was,” Stewart said on Wednesday. “This was the closure I wanted to have and needed to have with my career.”

He made the Pro Bowl in 2001 after leading Pittsburgh to a 13-3 record but never really recovered after getting pulled for Tommy Maddox after the team started 0-2 and he was struggling in week three when the team eventually had to rally back to beat Cleveland in OT.

Can Redmen Carry the Load for the Steelers Run Game?
Miller to Get a Bigger Look in the Steelers Offense in 2012?