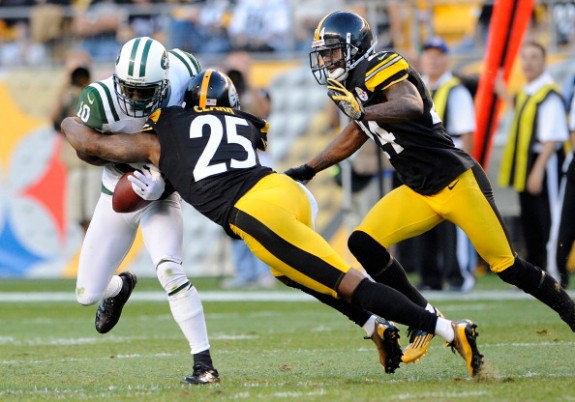 All week long ESPN, NFL Network and any other sports show gushed about how good the Jets offense was.

This after one game against a bad Bills team, a game where the Bills basically gave the Jets a number of shots via turnovers and poor play by Ryan Fitzpatrick.

Sunday at Heinz Field, the Jets and the rest of the world learned just how good the Jets offense is. Not very.

The Steelers punched the supposed great Jets offense in the mouth, holding average QB Mark Sanchez to his usual poor numbers, and feasting on a Jets defense missing Darrelle Revis in a runaway 27-10 win.

The Steelers offense, a unit no one talked about entering the game, did pretty much as they pleased against the Jets. Ben Roethlisberger passed for 275 yards and two touchdowns, and hit passes all over the field.

Roethlisberger completed 24 of 31 passes, he hit Heath Miller for a 1-yard score to give the Steelers the lead late in the first half, then found Mike Wallace for a 37-yard strike early in the third quarter to break the game open.

Sanchez threw an early TD to former Steeler Santonio Holmes, but after that he and the rest of the offense did little. On the day, the QB threw for 138 yards. He was 10 of 27 passing and was just 6 of 17 in the second half, with two of those completions coming on a last-second stat-padding drive.

The Jets took leads of 7-3 and 10-6 behind their offense while the Steelers took awhile to get comfortable. Sanchez hit Holmes for a 14-yard touchdown pass to cap a 90-yard drive then put together a 12-play, 61-yard march that was capped by Nick Folk’s 38-yard field goal.

The Steelers took the lead late in the half, with Roethlisberger leading them 80 yards in 11 plays, the last one a simple lob to Miller that put the Steelers up 13-10.

New York took over at its 31 after the ensuing kickoff with 57 seconds left before the break. Even though the Jets had two timeouts remaining and decent field position, they chose to sit on the ball, and after that, were never in the game.

The Steelers pounded them in the second half, while their offense had a back breaking 10 plus minute drive that wiped out any chance the Jets had. Issac Redmen wrapped up the TD drive with a spin move for a score to make it 27-10.

That’s how it would end, with the black and gold back to normal, celebrating on the sideline at 1-1 after last weeks loss to the Broncos.

Now, it’s getting ready for the Raiders, a team that is already 0-2, and will be coming off a terrible game in Miami on Sunday.

If the Steelers keep playing as they did today vs the Jets, they will be tough to beat.

Jets at Steelers Week Two Inactives – No Harrison, Polamalu
Poll Questions – Looking Back at the Jets and Ahead to Oakland