Polamalu All But Ruled Out for Thursday; Woodley Has a Shot to Play 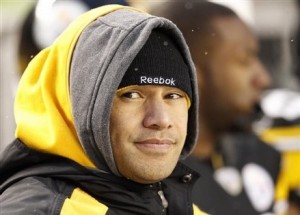 News that should not be much of a surprise, the Steelers will likely not have the services of safety Troy Polamalu this Thursday night against the Titans.

Polamalu re-injured his right calf against the Eagles on Sunday.

“He will probably be deemed out this week because of the week itself being a quick turnaround and the nature of the injury,” said Coach Mike Tomlin. “We will evaluate him when get back from Tennessee. We don’t think he will participate.”

Linebacker LaMarr Woodley also could be out this week, but this is still a chance he could play after suffering a hamstring injury against the Eagles. With a short week Tomlin said he is “leaning more on him being out, as opposed to being in,” but wouldn’t rule it out.