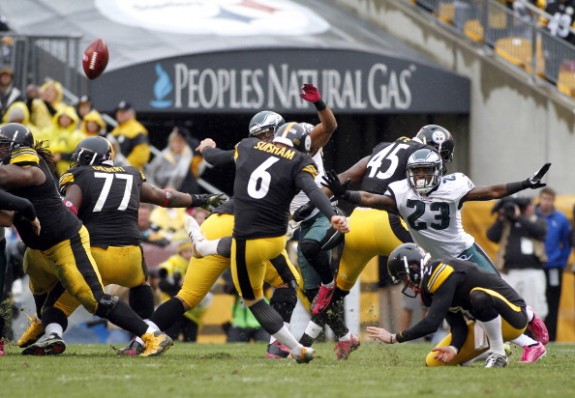 Coach Tomlin: It’s awesome to get out of here with a win against a very good team. Obviously, we weren’t really sharp early, particularly with some self-inflicted wounds, some things that usually occur when you come out of a bye, penalties and so forth. We have to get better in that area. But I am thankful that we were able to do what was necessary to win. Offense, defense, and special teams, a lot of contributions from all three phases. More than anything, the guys were resilient. They stayed together. They delivered the necessary plays down the stretch, which is important and the difference between winning and losing. From an injury standpoint, there’s a few to note. [LaMarr] Woodley has a right hamstring; we don’t know the severity of it. We’ll see. Working on a short week is probably not a good sign for him, but we’ll go day-to-day with that. Troy [Polamalu] re-aggravated his calf. Again, we don’t know the extent of it. Same thing, working on a short week, we’ll see. Ike Taylor was able to go back in the game. He should be fine. The rest are bumps and bruises that go along the way. I tip my hat to Philly. They’re a good team and I’m thankful we were able to win.

I thought it was a good start. He’s always a highly conditioned guy. Obviously, he has to get a little bit more ball security. It was a great place to begin and I though he not only ran well and hard and caught the ball, but he was a source of energy for the unit. That’s what great players do. They inspire those around them. I thought he did that for the group.

James is another guy that’s highly conditioned. He’s in the building on off days working on conditioning and at lunch time on a daily basis. We’re going to watch him but it became evident that he was game-ready from a conditioning standpoint. It was tight ballgame and we needed his services.

Re: The weather playing a factor in getting into field goal range:

I wasn’t worried about the rain. I just was worried about his range. That was pre-determined before the game and we don’t vary from that. We don’t let the game circumstances get us tight in terms of our decision-making. We knew where he was. The weather wasn’t significant. I was more concerned about young Drew [Butler] on the hold. He did a nice job.

Re: Performance of the offensive line:

We ran the ball well. I think we were over 4.5 yards per carry. We protected the quarterback. They did the job today.

Re: The game-winning drive:

Is it troubling that the defense gave up a fourth-quarter lead again?

Does the fourth quarter bring out the best in QB Ben Roethlisberger?

What do you attribute that to?

I think all of the guys that you can make an argument for being franchise quarterbacks, I think that’s the common tie that binds them. They come in many different forms, shapes, and sizes and skill sets. Some of them are pocket passers. Some of them are mobile. But, the reality is if they’re in that discussion it’s because they deliver when it’s time to deliver. No question, I don’t care who you’re talking to, [Roethlisberger] is in that discussion.

Re: WR Emmanuel Sanders third down catch on the game-winning drive:

I’m not going to go through the progression with you. Obviously, he was an option.

Suisham Kicks the Steelers to a Final Play 16-14 Win Over Eagles
Polamalu All But Ruled Out for Thursday; Woodley Has a Shot to Play