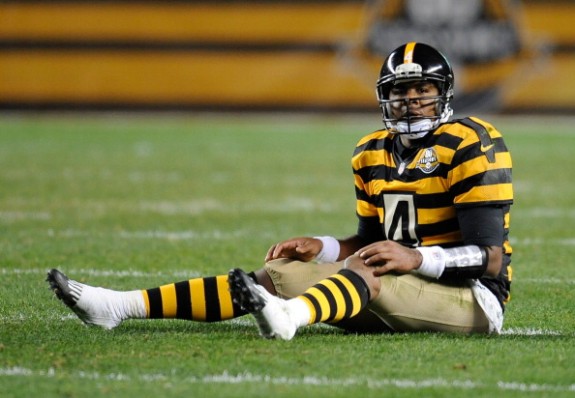 Coach Tomlin: Tough football game. Nip and tuck. The difference is obviously that we didn’t find a significant play, particularly in the waning moments and in any of the three phases to be the difference, to put points on the board and allow us to get out of the stadium with the win. We accept responsibility for our performance, but we also tip our hat to those guys. They did enough to win the football game. On the injury front, Ziggy Hood had a lower back, Isaac Redman sustained a concussion, Baron Batch had a foot injury and Jerricho Cotchery has a rib injury that’s being evaluated. Some other bumps and bruises that are being evaluated, nothing definitive at this point. I’d be happy to answer any questions.

Did Baltimore do anything special to block on the punt return for a touchdown?
No, it was a good effort by him. They did a nice job, they double-viced our gunners there and when they do that, the tackle has to come from the core of the punt formation and it didn’t, but nice execution by them. Obviously, a significant football play.

Re: The lack of third down conversions:
It’s a Steelers-Ravens game. They didn’t convert any either. We expected this to be a net punting type game and a significant play was going to swing it. Unfortunately for us, they provided a significant play with the punt return.

Did you think Leftwich had that type of long-run capability?
[Laughs] I don’t think he did either, but we’ll take it. Nice effort.

Re: The two early timeouts in the second half:
The play clock was running down so, obviously, it was confusing.

Re: Using the last timeout before the two-minute warning:
We were hoping we were going to get a stop there and I think we had an offsides or something. We wanted to get a stop there, stop the time, have them in a long yardage situation and maybe encourage them to throw the football. But that didn’t transpire.

Re: Ben Roethlisberger being an active leader on the sidelines:
He didn’t do anything any other quarterback wouldn’t do. Charlie [Batch] does a nice job, Byron does a nice job when Ben’s playing. We expect those guys to be active participants in adjustments and communication, particularly on the sideline and during timeouts.

Wasted Chances: Steelers Fall Two Back of Baltimore in 13-10 Setback
Video: Tomlin on the Three-Point Loss to Baltimore That Drops the Steelers to 6-4