Wasted Chances: Steelers Fall Two Back of Baltimore in 13-10 Setback 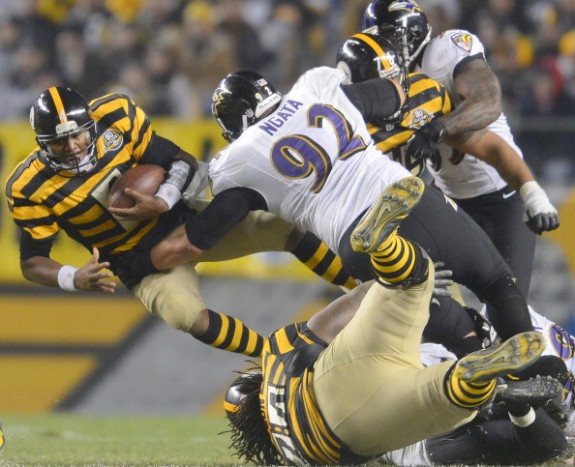 The Steelers blew a golden opportunity Sunday night to tie the Ravens for first in the AFC North, and now instead may have to settle for fighting for a wild card after falling to the Ravens at home 13-10.

“The difference is obviously that we didn’t find a significant play, particularly in the waning moments and in any of the three phases to be the difference, to put points on the board,” Steelers coach Mike Tomlin said.

The loss puts the Steelers at 6-4 on the year, while the Ravens are now 8-2. The setback also snaps the Steelers four game winning streak.

The game was close all the way, and in the end the difference was a punt return by Ravens kick returner Jacoby Jones of 63 yards for a score that eventually was the dagger for the black and gold.

Ravens kicker Justin Tucker made a pair of field goals, one after Mike Wallace put the ball on the ground with a fumble deep in Steelers territory that took all the momentum away from the Steelers who were up 7-0 at the time.

The Ravens led 10-7 at the half, and 13-7 when the Steelers finally put a drive together with QB Byron Leftwich leading the way, going 80 yards in 12 plays in the third quarter, but in the end they settled for a short Shaun Suisham field goal.

Little did anyone know that with :34 seconds left in the third it would be the final score of the night.

Leftwich, making his first start in more than three years, was average at best, going 18 of 39 passes for 201 yards and an interception. He ran for a score but was also sacked three times.

He missed on a number of passes, as it appeared he was hurt after racing for a 31-yard touchdown on the opening series of the game to give the Steelers a quick 7-0 lead.

He was mostly short on a number of passes, bouncing a few in, and despite what Tomlin said before the game about Leftwich’s “deadly accuracy,” it was not there this Sunday night.

Ravens QB Joe Flacco wasn’t much better, completing 20 of 32 passes for 164 yards, but the Ravens didn’t need Flacco to make a big play, as their special teams did that for the win.

The Steelers fell to 0-5 against the Ravens since 2005 when Ben Roethlisberger doesn’t start at QB. All he could do on this night was watch helplessly from the sidelines in a grey sweatshirt and pants.

Pittsburgh’s D played a whale of a game, holding Ravens RB Ray Rice to just 40 yards on 20 carries, but it didn’t matter.

The Steelers offense didn’t do much after the shocking opening series, and their special teams wasn’t very “special” on this night allowing Jones to race through for the backbreaking score.

In the end, the Steelers outgained the Ravens 311 to 200, and held the ball 32:51 to 27:09, but all that mattered was the final number on the scoreboard, showing Pittsburgh three points less than Baltimore.

It’s the third time in a row that the Ravens have beaten the Steelers, and they can basically print Division Champ shirts if they beat the Steelers are home in two weeks.

Jonathan Dwyer led a Steelers ground game that went for 134 yards on 27 carries, putting up 5 yards a carry. He had 55 of those 134 yards, but the run game was inconsistent as OC Todd Haley let Leftwich throw the ball 39 times and they rushed it just 27 times.

For now, the Steelers have a week to prepare for a road trip to Cleveland to play the 2-8 Browns, who they have dominated as of late. They can’t look past Cleveland, and likely won’t after this punch in the gut defeat.