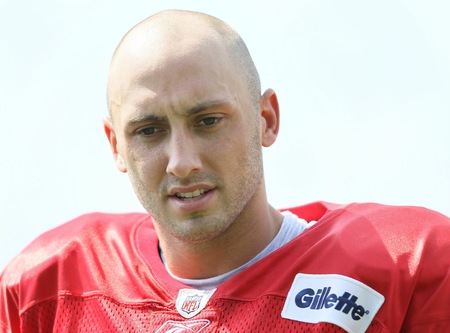 It will be a very busy day Tuesday for the Steelers, as they will not only work out former wide out Plaxico Burress, but also a couple QB’s that could possibly be the backup for Charlie Batch Sunday.

One QB coming in for a workout is former Michigan State quarterback Brian Hoyer. He was for awhile on the Patriots roster, which makes him being in good company having worked with Tom Brady.

A second QB coming in is former Eagles backup QB Mike Kafka. He played in four games for the Eagles last season, and was also on their roster back in the 2010 season.

Neither Hoyer or Kafka has started in an NFL regular-season game.

The need for a backup is huge considering the team has injuries to not only starter Ben Roethlisberger but also the starter from Sunday nights loss to the Ravens – Byron Leftwich.

Steelers to Give Physical to Former WR Plaxico Burress – Why?
Steelers Bring Back WR Burress, Ink QB Hoyer to Back Up Batch