Can the Steelers Claim a Playoff Spot? 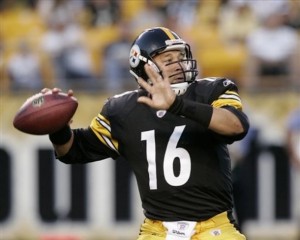 The Pittsburgh Steelers are in the thick of the playoff race in the AFC despite losing Big Ben to a sprained shoulder and injured ribs for several weeks. Charlie Batch has gone 1-1 filling in for the injured starter, doing just enough to win against the Ravens on Sunday. The team sits at 7-5, and with Ben Roethlisberger will return tomorrow against the San Diego Chargers, the Steelers have an ideal opportunity to take the AFC North away from the division-leading Ravens. But can they actually do it?

Third-string quarterback Charlie Batch played a great game on Sunday night against the Ravens, and it was a crucial one. If the Steelers wanted to keep their playoff hopes alive and legitimate, they absolutely had to secure the win against the Ravens. After his dreadful three interception performance against the Cleveland Browns two weeks ago, Batch knew he needed to elevate his game.

“I knew going into it that I had to play better,” Batch said. “I had to go out there and lead this offense the way that I know I can. I felt the receivers did a great job of getting open, the offensive line did a great job of protecting. I was really able to set my feet and just play ball and have fun.”

Pittsburgh’s remaining schedule looks like this: vs. San Diego Chargers, at Dallas Cowboys, vs. Cincinnati Bengals and vs. Cleveland Browns. They get three home games and just one road trip in their four remaining games. Assuming Big Ben comes back next week against the Chargers, those are four very winnable games. The Steelers may just need to win out, too: the Bengals are breathing down their necks, tied for second place in the division at 7-5. If the season ended today, Pittsburgh would be the sixth seed in the playoffs, but they will need to scrap down the stretch just to hang on to that.

As usual, the Steelers have been racked by injuries this season, and as usual, they have found a way to cope. Despite losing James Harrison and Troy Polamalu for extended stretches this year, the Steelers defense still ranks near the top of the NFL.

They are first overall in passing yardage allowed and fifth in rushing. Their offense has struggled mightily at times; they have been in six games this year decided by a field goal. However, if Roethlisberger can return to some semblance of his former self and his wide receivers, especially Emmanuel Sanders, can remain healthy and drop-free, the Steelers should be able to claim a playoff spot.

“We aren’t going to have any team meetings, not going to sit in a circle and sing `Kumbaya’ or anything like that,” safety Ryan Clark said after Pittsburgh’s ugly 20-14 loss to the Cleveland Browns two weeks ago. “We are going to do what we do after we win a game — go back to work and figure out a way to play better.”

Mid-season struggles and injury woes are nothing new to this team. The Steelers learned on Sunday that they have lost veteran cornerback Ike Taylor for three to six weeks due to an ankle injury he suffered in the first series against the Ravens. Despite everything, don’t be surprised if the Steelers sneak into the playoffs and make some noise.

Lucas McMillan is a writer for FootballSchedule.me. To checkout the week-by-week Steelers Schedule as well as the latest NFL and college football news, visit Football Schedule. Follow Football Schedule on Facebook and Twitter @FBSchedule.

Handshake Gate: Harbaugh Says Nothing Unusual About Shake with Tomlin Postgame
Steelers Slammed by San Diego 34-24 to Fall to 7-6