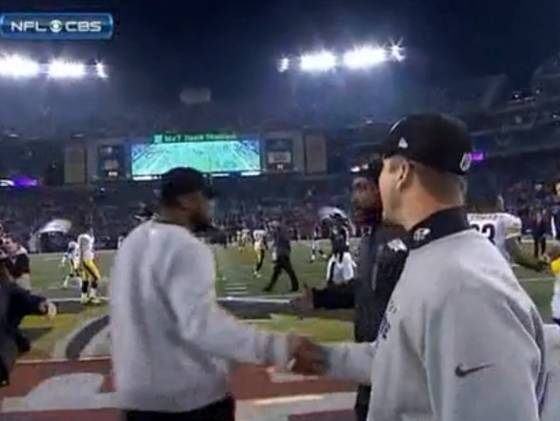 There’s been plenty of chatter about the handshake in the postgame between Steelers coach Mike Tomlin and Ravens coach John Harbaugh following the Steelers 23-20 win Sunday.

Monday, Harbaugh played dumb, stating that he was unaware of any attention that was paid to it by TV crews or anyone else.

When asked about it, he stated “there was nothing uncomfortable at all,” and he also said that “he felt fine about it”.

Harbaugh said he wanted to make sure Tomlin knew the Ravens congratulated them. For some reason, Tomlin seemed not too happy about the congrats at midfield after the big win.

“I felt fine about it,” he said. “I just wanted to make sure he knew we congratulated him.”

If there’s a round three in the postseason, we will see if the handshake is as interesting as it was yesterday.