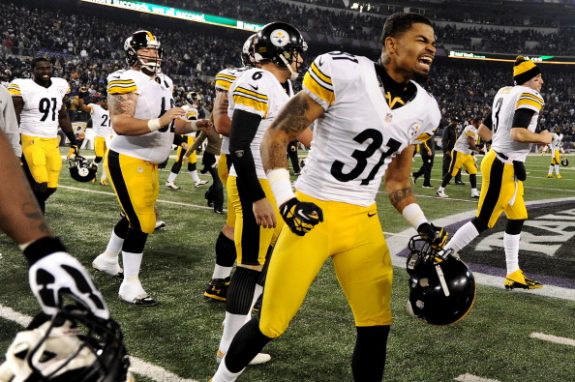 Opening Comments: It was a big, necessary win for us tonight in a hostile environment. We don’t take that lightly. We’ll appreciate it tonight and the efforts of men in less than ideal circumstances no doubt. We expect them to do the job and they were able to do it. It was a tough physical and mental battle and we persevered. We had some injuries. Ike Taylor has an ankle, maybe a lower leg. We have to get an MRI on that and we’ll have some clarity on that, maybe a little later. Emmanuel Sanders had an AC joint and was able to go back into the game. Will Johnson probably has a concussion. We’ll evaluate him and see where that leads us. The rest of them are bumps and bruises. Obviously, it’s a necessary victory for us tonight. We didn’t necessarily make it as easy as we could have. We turned the ball over on their half of the field a couple times. We had a significant chunk on a third down, a seemingly third down conversion, we turned another one over. We’ll continue to work on those things. We’re not going to apologize for our shortcomings. We will acknowledge them and continue to work on them.

Seeing what Charlie Batch did this week, could you envision what would have happened last week if it were not for the turnovers?

I don’t worry about last week. Last week is what it was. It’s on tape. Would’ve, should’ve, could’ve is not in our business. He did the job tonight along with his comrades and that is what is important as I stand here. Last week is on tape.

I don’t care what their element of the story is in terms of 16 straight and all of that. We needed this win tonight for our football team and thankfully we got it.

Re: Play of Kelvin Beachum

The big thing is I appreciate the fact that they didn’t let go of the rope. They’re fighting and potentially frustrating things happen. We gain a turnover, we give it back. I take responsibility for that on the reverse pass. I am trying to search for a significant play. More than anything they showed their mettle because they didn’t let those circumstances get them down. They were angry, but it didn’t steal their love for the play and the game. They played extremely hard and when you do that you are going to get opportunities and they created some.

How much does Heath Miller boost your offensive receiving corps?

He’s been that guy all year and largely over the course of his career. We have a great deal of respect for him and what he does and what he is capable of. He is a really, really good football player.

Thoughts on keeping the ball away from Jacoby Jones?

He hurt us last time. We felt like that play was the difference. Not singularly pointing to that play, but we realize every time the ball is snapped you’ve got an opportunity. The result of that play was the margin, the difference. We just wanted to play smart. At times we were going to have to challenge him and kick it to him and we did. We kicked it away right before the half, when we scored before the half and we covered. He is a dangerous guy. He is the leading kick returner in the AFC. He has hurt us in the punt return game. The guys did a nice job tonight.

Re: Guys not letting go of the rope – did you count on that tonight?

I count on it, but I also acknowledge it and don’t take it for granted.

That comes with the job. Not only him, but everybody that plays that position for us. They embrace it.

Batch from the Dead: Steelers Rally Behind 3rd String QB for Stunning 23-20 Win Over Ravens
Handshake Gate: Harbaugh Says Nothing Unusual About Shake with Tomlin Postgame