Who Is The Biggest AFC North Draft Bust Of All-Time? 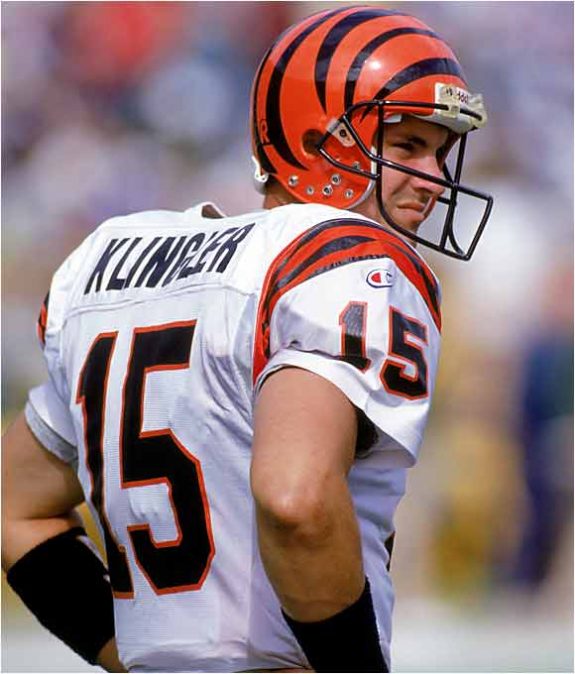 David Klinger. The 6th overall choice from ’92, Klinger eventually was shipped out of town after Jeff Blake, the 6th round choice from the same draft, outplayed him and took his starting job. Despite having Carl Pickens and Darnay Scott at his disposal, the former Cougar could not live up to the hype generated from College. He finished his pro career with more interceptions (22) than touchdowns (16). Klinger is a prime example of how a great system in College can make you look better than you truly are. As a starter in Cincy, he finished with a career 4-21 record. That says it all.

The Browns have had their share of bad picks over the past 12 years they have been back in the league, but let’s go back to the Marty Schottenheimer era for the worst overall pick in team history. That of course would be linebacker Mike Junkin, who was the 5th overall pick in the 1987 draft. Known as “Mad Dog,” Junkin was a bust who was supposed to take the place of Chip Banks, who was shipped out to the Chargers. The Browns moved up 19 draft positions in the first 2 rounds by swapping picks with the Chargers and then Schottenheimer shocked the world by drafting Junkin fifth overall. Not only was Junkin an unknown from Duke, he was injury prone. Junkin could have easily been gotten much later in the draft, but Marty felt he was worth the 5th overall pick. Boy was he wrong. Junkin did make one sensational play for the Browns, albeit in pre-season, when he intercepted a pass in the flat and returned it for a touchdown. Later, Schottenheimer admitted that Mad Dog was out of position on the play, and the interception was a should have never happened.

QB Kyle Boller has to be one of the more polarizing figures in Ravens history. There are still plenty of Boller backers out there among the Ravens faithful today that will say that he was rushed too soon, and that he didn’t have the weapons around him to compete. Both have some validity.  But the fact remains that he didn’t get the job done as a quarterback. He had a strong arm, but had difficulty with reads and progressions. He had excellent mobility but often escaped the pocket too soon and was the victim of “Happy Feet”. He never could seem to put it all together but through it all he always took responsibility and showed toughness. He just should have never been taken that high. The quote that best sums him up comes from his former Head Coach Brian Billick, “You know what happens when you miss on a QB in the first round? You get fired.”

The Steelers usually don’t blow first round picks, but one name comes to mind in the Bill Cowher era that gives Steelers fans nightmares – Jamain Stephens. This bust was a 340 pound out of shape OT from North Carolina A&T who was a converted DT who never became much of anything in 7 seasons in the NFL. No experts had him going in the first round and he was a “long-term project” who basically didn’t play in 96, played in 8 games in 97, and then in 98 finally played in 11 games, starting 10 on a team that could have been the worst of Cowhers years in Pittsburgh. Finally in 99 he failed the run test in training camp and Cowher had seen enough, cutting him. He played a couple seasons in Cincy before finally hanging it up. RB Tim Worley and LB Huey Richardson deserve consideration for the list as well.

Rooney In The Corner Of Haley After One Season As OC
What Do The Steelers Do To Improve The Run Game In 2013?