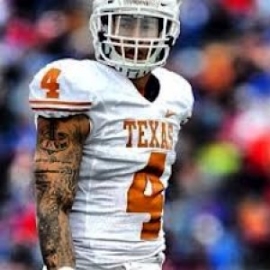 Steelers head coach Mike Tomlin was spotted at the University of Texas‘ pro day on Tuesday. Pro day’s are workouts for players entering into the NFL Draft that give scouts, coaches, GM’s and other front office personnel to see prospects workout in their college’s practice facility. Although the highly populated Texas Alumni quarterback Vince Young was there working out, the Steelers were not there to see him. They were most likely checking out 6-foot safety, Kenny Vaccaro.

Vaccaro is predicted to go in the middle of round one, and the Steelers hold the number 17 overall pick. Vaccaro is suffering from a hip flexor injury that he suffered from a private workout so he did not run the 40 yard dash. However, he did participate in all the other position drills. Vaccaro ran a 4.63 in the NFL Scouting Combine.

We will be breaking down Vaccaro more once the NFL Draft gets closer and we can get a little more of a feel of what the Steelers draft board may look like. Although the Steelers tend to not leak information about who they like and who they don’t like.

Flashback: The Steelers have only drafted one safety in the first round. He goes by the name of Troy Polamalu. Vaccaro is raw and if drafted, he could learn from one of the best safeties to ever lace up a pair of cleats.

Why The Steelers Will NOT Bring Back Harrison
Video: A Classic Look Back At The Steelers-Ravens 2010 Playoff Battle