Why The Steelers Will NOT Bring Back Harrison 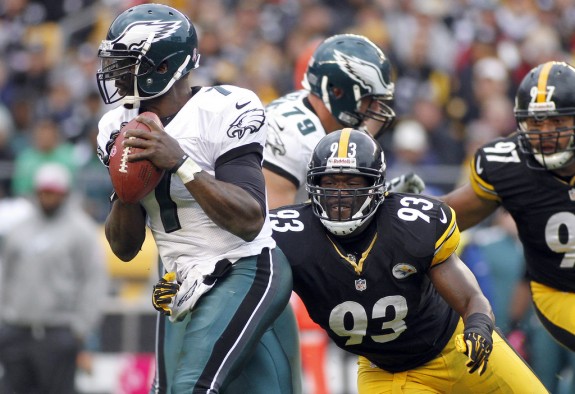 Jason Worilds is a 25 year old, three year veteran at outside linebacker out of Virginia Tech. In the picture above, you will see Jason Worilds making a sack on a Virginia Tech alumni quarterback, Michael Vick in week five of the 2012 regular season when the Pittsburgh Steelers defeated the Philadelphia Eagles in a 16-14 nail biter. Worilds started 25-of-41 games for Virginia Tech. He recorded 133 tackles (64 solo & 34.5 for a loss), 75 quarterback pressures, 5 forced fumbles, and 15.5 sacks. Why am I breaking down Worilds’ college stats? This will be his rookie season as the full-time starting right outside linebacker, and I will refer back to these later. He will be taking over James Harrison’s job. In Worilds’ short career with the Steelers, he has racked up 10 sacks and 62 total tackles. Worilds has spent three seasons learning the Steelers’ way to play defense and backing up All-Pros James Harrison and LaMarr Woodley. It is now Worilds’ chance to make a legacy in a Steelers uniform.

Worilds has started 10 games for the Steelers and has given them quality snaps. However, coaches Mike Tomlin and Dick Lebeau will not be happy with a low production season from Worilds as the team is eager to return back into the playoffs in 2012. The media has grilled the Steelers during the offseason. However, coach Tomlin responded by saying that he will see them on the football field where he plans on hushing the media and the critics.

Before free agency opened two weeks ago from today, the Steelers released the 35 year old Harrison. Reports said that the All-Pro linebacker refused to take a 30% pay cut. This resulted in a decision to release James Harrison from the Steelers.

The Steelers then made the decision to give the job to Jason Worilds. Worilds has been “chomping at the bit” to take over the spot. The Steelers are expected to take an outside linebacker or two in the draft seeing how they are running thin at the position. The question keeps getting asked, why haven’t the Steelers targeted a Dwight Freeney or John Abraham in free agency to help the defense and add some veteranship? The Steelers like guys that are capable of covering, tackling, and pressuring. Worilds is capable of doing so (college stats). For example, in the 14 games that Freeney played last season, he only racked up 12 tackles (5 which are sacks). Worilds’ stats were better from starting only 3 games (27 tackles, 5 sacks). Freeney’s highest tackling season (41) came back in his rookie season (2002). Abraham has never had more than 40 tackles in a season while in Atlanta and is already 34 years old.

Not to mention the salary cap position the Steelers are currently in. The Steelers are roughly $2 million under the 2013 cap, and would not be able to sign a Freeney or Abraham with that space. Now what about Harrison? Since being released, James Harrison has only been scheduled to do one visit with a team. The Baltimore Ravens. That interview ended up not taking place due to the Ravens signing former Broncos‘ linebacker/defensive end, Elvis Dumervil. Now Harrison is not exactly drawing intrest from the rest of the league. Harrison and his agent, Bill Parise, said that he and his client would be open to to coming back to the Steelers. That will not be happening.

On Tuesday, reports say Steelers have informed Harrison they are no longer interested in bringing him back. Why? Coach Tomlin and the staff has already handed the job to Worilds. How professional would it be to bring back Harrison and ripping the starting job from Worilds without him getting a chance to play? When the Steelers make a decision like this, they seem to stick to their guns about it. Worilds has already been informed that it is now his job to lose.

Although we already know the Steelers won’t be bringing Harrison, how could they with the cap situation? They would have to wait until at least June when the Steelers get the $5.5 million from Willie Colon’s contract. The Steelers would not be interested in signing him to as much as he would have made if he took the 30% pay cut. It would most likely have been a one year minimum veteran deal.

However, the Steelers have not left us hanging. They gave Harrison and the media the answer right away that they were not interested in him. So what does this all mean? James Harrison’s career could very well be over. No other teams have reported to be interested at this point. With the draft getting closer, teams will be focussing their attention on young pass rushers. This also means that the third year veteran from Virginia Tech will now be getting his chance to add on to the great pass rushers that have put on a Steelers uniform. Steelers’ pass rushers seem to rise to the challenge when their number is called. Now it’s time to see what Worilds has to offer.