Steelers Football: Can it Come Back? 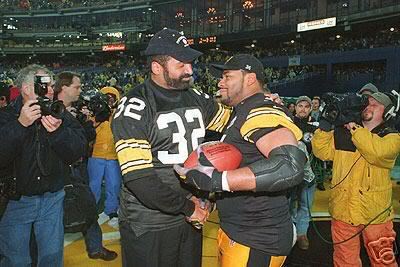 The name “Steelers Football” came around in the 1970’s. It started because of Franco Harris. The Steelers would always run the ball most of time every game with him because he would rack up huge yards for Pittsburgh. That is mostly how they won four Super Bowls in the 70’s with of course the help of QB Terry Bradshaw and the help of the Immaculate Reception. Franco would always break tackles and run for big gains and that is what Steelers Football is all about. He did this for many years until he retired.

In the 1990’s to the early 2000’s, Jerome Bettis or “The Bus” came along. He brought Steelers football to its finest since Franco Harris. Bettis was unusually large for a running back. He weighed over 250 pounds! Every time he would get the ball, he would pound people and get at least three to 4 yards a carry. Not even a huge defensive lineman like Casey Hampton could bring down The Bus! His best year came when the Steelers marched to the Superbowl in 2006 as the 6th seed. He had finally won the Super Bowl and retired afterwards. He rushed a lot during those playoffs and broke lots of tackles and scored a couple Touchdowns for the Steelers to go all the way.

Ever since 2006, Steelers football has not been as it was once back when they had Franco and Bettis. Sure they had Willie Parker who was great but he was nothing like the Bus or Franco. He didn’t break any records like the Bus did or Franco. The backs that the Steelers have now (Redmen, Dwyer) just don’t cut it for the Steelers. The Steelers had one of their worst rushing seasons ever in Steelers history this year! The Steelers needs to draft a RB like Bettis or Franco because if they do, boy they will be back just like they were in the old days. They will be back to Steelers football!