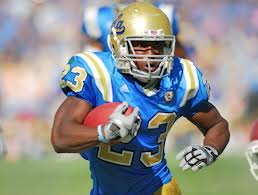 The Steelers brought in just one other player besides wide receiver Josh Boyce today, which we reported yesterday. That one player was Johnathan Franklin, the running back out of UCLA. We have a breakdown of Franklin for you. This overview is brought by CBS Sports:

RB Johnathan Franklin – “Franklin was a little-known three-star recruit out of high school and redshirted in 2008 before becoming a four-year starter for the Bruins. He produced quality numbers as a freshman, sophomore and junior and needed a strong senior season in order to grab the attention of NFL scouts.

Franklin thrived in 2012 as part of UCLA’s zone-read offense, routinely making something out of nothing with his fast, tough and energetic running style. Although he doesn’t have the frame to get much bigger than 205 pounds, he has good muscle definition and has stayed durable over the years, leaving UCLA with 45 career starts.

Franklin loves to bounce runs outside with this vision and explosive lateral movements, reminding many of another former Bruin running back with a smaller stature, but very balanced attack (Maurice Jones-Drew).” Projection: Round 2