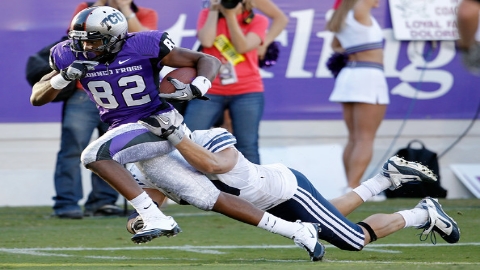 As we have been reporting these past few days, the Steelers are bringing in NFL Draft prospects day-by-day and evaluating each player with the mindset of maybe drafting them when the NFL Draft begins in just 22 days (April 25th-27th). Today the Steelers brought in TCU wide receiver Josh Boyce and Clemson defensive end/linebacker Malliciah Goodman. Below are some quick tidbits of each player. As before, we are using the bios from CBS Sports and NFL.com.

DE Malliciah Goodman – “Despite playing behind future second round draft picks Da’Quan Bowers and Andre Branch over the first two seasons, the coaches considered Goodman too good to redshirt of keep on the sidelines as he saw a good amount of playing time as a reserve.

With Bowers going to the NFL, Goodman became a starter in 2011 as a junior and recorded a career-best 49 tackles. He saw his snaps diminish in 2012, but he did finish among the team leaders in sacks (7.0) and tackles for loss (9.5).

At 272 pounds, Goodman isn’t the quickest or most explosive rusher off the edge, but he works hard to the pocket and has the strength to handle blockers in one-on-one situations.

The career statistics aren’t gaudy (12 sacks) and he’ll never be a double-digit sack artist, but Goodman brings intriguing tools to the table. He had a “wow” bowl game performance against LSU with three sacks, which brings the question: where was this intensity the rest of the season?” Projection: Rounds 3-4

WR Josh Boyce – “Boyce was a teammate of 2011 Heisman Trophy winner and the 2012 draft’s No. 2 overall pick Robert Griffin III at Copperas Cove High School. And one of their top rivals was Brownwood, the school of embattled TCU quarterback Casey Pachall.

He redshirted his first season in Waco, but became heavily involved in the Horned Frogs’ prolific offense quarterbacked by current Cincinnati Bengals starter Andy Dalton in 2010. Boyce played in every game, starting eight of the last nine, and finishing second on the team in receiving yards (646 on 34 catches) and scoring six touchdowns.

As a sophomore, Boyce was named a first-team All-Mountain West Conference pick after leading the team in receptions (61), yards (998) and receiving touchdowns (nine). As a junior, despite only playing four games with Pachall as the starting quarterback, Boyce managed 66 catches for 891 yards, and seven touchdowns.” Projection: Rounds 4-5