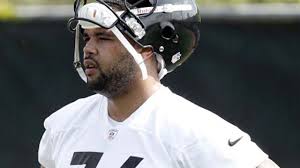 A third suspect in the late-night stabbing of Mike Adams was captured as he attempted to flee his Florida motel room, Pittsburgh police said Friday.

Officers used a stun gun on 26-year-old Jerrell Whitlock after he tried to flee through a back door in his Gainesville motel room and refused officers’ commands to get down, police said.

Whitlock had been sought on charges of attempted robbery, aggravated assault and conspiracy since Adams was stabbed twice in a June 1 attempted carjacking on Pittsburgh’s South Side.

Two other men are already jailed on similar charges.

Adams had surgery for stab wounds, but the 6-foot-7 345-pound lineman expects to recover by training camp in late July. Adams told police the three men tried to carjack him, but he didn’t have his car keys. One man then pointed a gun at his face while the other stabbed him twice before all three fled, according to police.

Police said detectives received a telephone call on Tuesday from a family member that helped lead them to Whitlock’s motel room. Whitlock and his girlfriend were taken to the Alachua County Jail, police said.

Whitlock was also wanted on an Allegheny County warrant for a probation violation for a firearms offense.