Was Not Focusing More On The TE Spot A Mistake This Offseason For The Steelers? 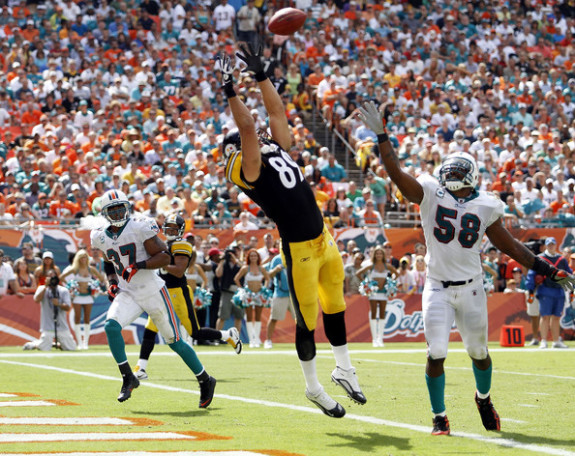 NFL blogger Jamison Hensley from ESPN talks about one need from each of the four AFC North teams that they didn’t fill.

The position he says the Steelers should have done a little more on – that of tight end.

Here’s what he had to say on the black and gold TE spot they failed to nail down.

Add a tight end as insurance for Heath Miller. Some have speculated that the Steelers’ ignoring the tight end position this offseason is a sign the team expects Miller to be ready for the start of the season. Miller, who had a resurgence in Todd Haley’s first season as offensive coordinator, tore knee ligaments late in the season and had surgery Jan. 2.

The last word on Miller came in late May, when there was a report he was running 100-yard sprints. Still, it’s unknown whether Miller will be suiting up for the Sept. 8 opener against the Tennessee Titans.

The Steelers have put themselves in a predicament if Miller is sidelined for an extended period. The Steelers signed Matt Spaeth in free agency, but he’s a run-blocking tight end. He has averaged eight catches per season. The only other tight end with any experience is David Paulson, who had seven catches last season as a rookie. This combination isn’t going to replace Miller’s 71 catches and eight touchdowns from a season ago.

While the points of Hensley do come across as valid, there’s a couple things to consider as to why the Steelers have yet to go out and try and secure one of the big name TE’s still floating around the market:

1. Spaeth’s Got Skills – While 2008 was quite a few seasons ago, there was two games specifically where Spaeth filled in for an injured Miller, and in those two games (11/9 vs Indy and 11/16 vs SD) he pulled in a combined 12 grabs for 108 yards. He’s been banged up a lot in his career, which is why the Steleers were able to get him back on the free agent market. Let’s not kid ourselves, he’s not Miller when it comes to making grabs, but if he can stay healthy, and that’s a big question, he’s shown that he can make some plays for the back and gold.

2. Paulson Has Growing to Do – A wide-eyed 24-year-old, I think that David Paulson has growing to do, and hopes that in his second season with the Steelers he can and will do it. Sure the former 7th round pick only had 7 catches and was targeted 11 times, but Miller was such a huge force for the team in 2012, no one really gave Paulson much to do out on the field other than to sit back and learn from Miller. Let’s see if the kid can take strides in year two.

3. Miller’s Health – There’s no doubt that with players like Dallas Clark, Travis Beckum and Evan Moore among free agent tight ends still on the market, the Steelers could have easily swooped one up if they really felt that there was no chance that Miller was going to be ready for the 2013 campaign. Instead, they continue to be impressed with the progress that Heath is making, and while training camp will be the first true test to how far he’s come, the Steelers deep down remain hopeful that he’ll get introduced with the starting offense come opening day September 8th at home vs the Titans.