Should The NFL Start To Censor Players On Twitter Following Victor Cruz’s Comments? 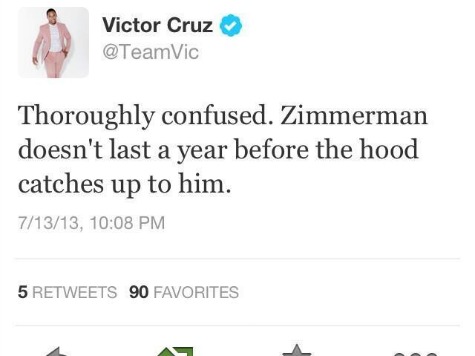 The above tweet from Giants WR Victor Cruz has since been deleted, but you get the point. NFL players should really think more before they tweet.

Too many times in this current day and age, players send out tweets before thinking, and just like last season with now former Steelers RB Rashard Mendenhall, the players then have to either say ‘sorry’ or end up getting in trouble with their teams.

In case you forgot about Mendenhall’s tweets back in May 2011, he threw out some odd tweets after the US killing of terrorist Osama Bin Laden. Here’s some of the tweets.

“I believe in God. I believe we’re ALL his children. And I believe HE is the ONE and ONLY judge.”

“Those who judge others, will also be judged themselves.”

“For those of you who said you want to see Bin Laden burn in hell . . . I ask how would God feel about your heart?”

Mendhall, and now Cruz are not the only ones that have taken twitter to the limit, and it will get worse before it gets better.

Players really need to put a muzzle over themselves before they take to their phone, IPad or computer keyboard.

It’s going to get worse before it gets better, and Cruz better be ready for some serious backlash for his Zimmerman comments, no matter how you felt about the outcome of the case.

Poll: What Position On The 2013 Steelers Concerns You The Most?
Steelers Maurkice Pouncey And Brother Show Support For Aaron Hernandez