What Player Steps Up As The Leader Of The Steelers Defense In 2013? 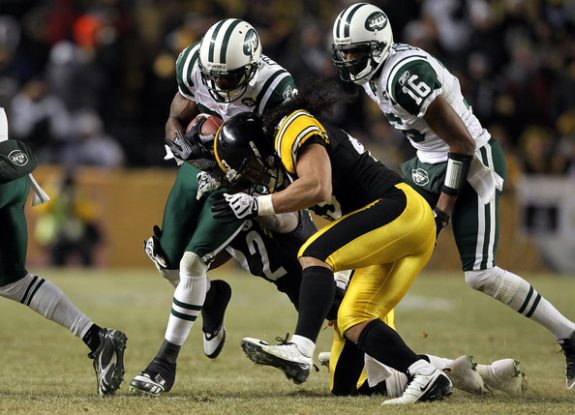 The 2012 Steelers defense seemed to be a unit poised for a big season, despite coming in with a key injury to starting LB James Harrison.

At points in the season, the unit was very good, but more often than not, they underachieved. They were good against the pass during parts of games, but left the door open too often for back breaking drives against teams like Cincy, Oakland and Tennessee that cost them key wins that could have meant the postseason.

This season has been a huge shift for the unit, with the departure of both Harrison, as well as cornerback Keenan Lewis (Saints) and long time NT Casey Hampton, who they did not resign.

So with a defense in transition, who will be the leader of the unit, and more importantly, the player that steps up and makes the plays that the defense needs to be successful in 2013?

1. LaMarr Woodley – Many felt, and rightfully so, that Woodley didn’t have a great season in 2012. Too often he seemed nowhere to be found at big points in games, and by the end many felt that he was oversized, and too worried about off the field stuff than what was happening on it. Now with Harrison gone, it’s a perfect time for Woodley to step up and have a huge season. He combined for 19 sacks in 2010 and 2011, but had just four last year, and simply needs to make more plays, and bigger plays, to make his mark on this unit.

2. Troy Polamalu – No question that this defense is a lot different, and a lot better, when Polamalu plays. Troy is a huge difference maker, but the issue is he needs to stay healthy and on the field to make that difference. Two years ago in 16 games Polamalu had 91 tackles, a sack and two picks. In just 7 games in 2012, he had 34 tackles, a sack and a pick, and it just seemed the aggressive nature of the unit wasn’t there when he was on the sidelines. If he can play 14-16 games, he could be that difference maker once again.

3. Brett Keisel – More and more as 2012 moved on it seemed that Keisel was the vocal leader of the unit, and now with Harrison and Hampton gone, he might just be the leader the Steelers need. Keisel had 46 tackles and 4.5 sacks for the club last year, and seemed to rally the troops most when the cards were down. He’s 35 years old, meaning that the clock to the end of his career is ticking, but since he wasn’t a full time player till later in his career, he could still have a big season or two left in him, and the Steelers need it.

4. Jarvis Jones – Why not? He’s young, comes in with a lot of expectations, and looks like a guy that could have been born wearing black and gold the way that he plays. There’s no doubt he’ll have to prove it to be the starter from day one, but there’s also no doubt that he has the talent and ability to beat out Jason Worilds with a good training camp in Latrobe. The Steelers need an infusion of talent and energy that maybe only youth can bring, and a huge rookie season from Jones can be just the ticket.

5. Shamarko Thomas – The rookie will likely have to sit back and learn from Polamalu his rookie season, but when is the last time you heard a young player say he ‘expects’ to be fined for hard hits? This kid is another infusion of energy the Steelers need, and he can bring it from day one, despite being undersized in many folks eyes. Don’t underestimate Thomas, and there’s a feeling fans will take to him right away in the Steel City with the way he brings it.