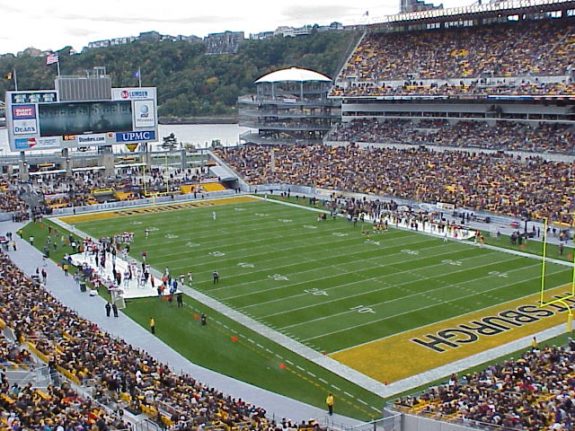 The Pittsburgh Steelers are encouraging fans to arrive early to enjoy the many activities surrounding game day at Heinz Field for Saturday’s preseason opener against the New York Giants. Kickoff is set for 7:30 p.m. and all gates will open at 5:30 p.m.

Beginning in 2013, all NFL teams have implemented a new safety policy at stadiums that will make the security process more efficient and effective. The policy affects the type and size of bags that are permitted into the stadium, not the items that fans normally need to bring to a game.

Heinz Field encourages fans to not bring in any type of bags. However, the following style and size bag, package or container at stadium plaza areas, stadium gates or when approaching queue lines of fans awaiting entry into the stadium:
•Bags that are clear plastic, vinyl or PVC and do not exceed 12″ x 6″ x 12.”
(Official NFL team logo clear plastic tote bags are available through steelers.com, at all Steelers Sideline Stores and at nflshop.com), or
•One-gallon clear plastic freezer bag (Ziploc bag or similar).
•Logo on bag cannot exceed 4.5″ tall by 3.4″ wide.
•Small clutch purses, approximately the size of a hand, or 4.5″ x 6.5″ with or without a handle or strap, may be carried into the stadium along with one of the clear bag options.
•An exception will be made for medically necessary items after proper inspection at each gate.
•Diapers and wipes can be carried in a clear bag, however diaper bags are not permitted.
•Each member of a family, including children, will be able to carry an approved clear bag and a clutch purse.
•The PA Army National Guard will distribute clear bag to all fans who enter the nearby parking lots.

The Steelers 1st-IN-GOAL promotion, sponsored by the Pittsburgh Post-Gazette, will allow fans who enter Heinz Field early on game days the opportunity to win exclusive prizes from the team. The first 25,000 fans who enter the stadium will be given a scratch-off card, and all 25,000 fans will be winners. Fans will have the opportunity to win pre-game field passes and the chance to participate in the pre-game Terrible Towel Twirl on the Steelers’ sideline just prior to kickoff, Steelers gift cards, Terrible Towels, Stage AE concert tickets, Nike replica jersey, fountain drinks from Pepsi and GetGo, Augustine’s pizzas, Silverstar Meats hot dogs, medium Premium Roast Coffee from McDonald’s, appetizers from Andora, PG Store offers, Official 59Fifty football cap from New Era, free Sabra products, overnight stays at Nemacolin Woodlands Resort and Spa, Sport Clips haircuts, admission to the Pro Football Hall of Fame, Helluva Good dip products and Dole Squishems products.

Fans are encouraged to stop by Stage AE prior to entering the stadium to participate in the Official Tailgate Zone of the Pittsburgh Steelers as many great prizes will be given away. Admission is free and the doors will open at 4 p.m., The Vagrants will perform prior to kickoff outside of Stage AE.

The Steelers are participating all season in the “Let’s Tackle Recycling” campaign. At every Steelers home game, the Sports & Exhibition Authority (SEA) and its partners are collecting aluminum cans, glass containers and plastic bottles and cups at tailgating parties in the parking lots outside of Heinz Field. The “Let’s Tackle Recycling” campaign is sponsored by the SEA in partnership with the Pittsburgh Steelers, Heinz Field, Waste Management, Three Rivers Power Sweep and Alco Parking.