CB Cortez Allen Back On The Field After Knee Surgery 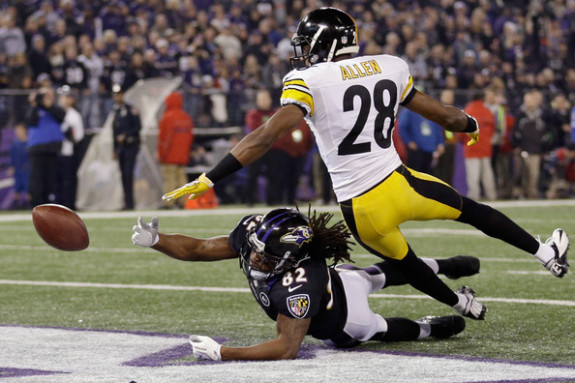 While running backs are going down and their QB is sitting on the sideline, the Steelers did get some good news on Friday about their cornerback position.

Cortez Allen, who is set to take over the starting CB spot this season opposite Ike Taylor, was back on the field Friday at camp for the first time since knee surgery.

Allen had surgery two weeks ago, but Friday did enough to be on the field in pass-coverage drills against Steelers wide outs.

There was no pads being worn and no contact in the drill, but it’s good news that he was back on the field, and that’s a good sign with three games left in the preseason.

“He looked good. His movement looks good. His quickness looks good,” Carnell Lake, secondary coach said to the Trib Review. “The medical staff is being cautious, and hopefully we’ll get him back soon. But he’ll probably take a little while to get the rust off.”

The left CB job is critical for this team in 2013, and it’s important to get Allen back. For now, the team has Curtis Brown and DeMarcus Van Dyke listed behind Allen filling in right now for Allen.

Running Backs Held Out Of Contact; Roethlisberger Sits
Clark Says In A Lot Of Ways Wheaton Already Better Than Wallace