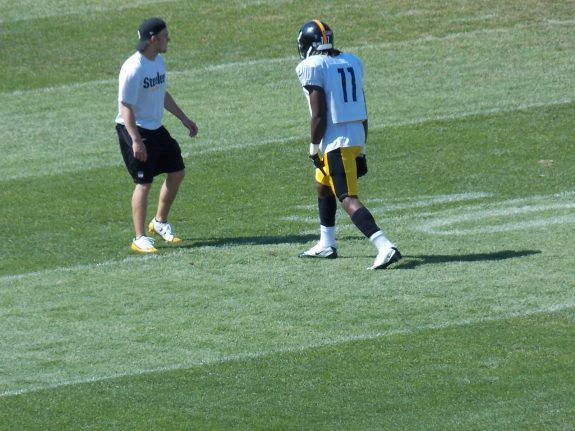 Markus Wheaton continues to make strides in his first camp with the Steelers, as the 3rd round pick has the team thinking that he may just move up to the third WR in 2013.

Wheaton will get another shot to get better on Monday night in Washington vs the Redskins, but for now, according to veteran safety Ryan Clark, the wide out is already making great improvement already.

Clark told Bob Pompenai today on 93.7 The Fan in Pittsburgh that in some ways, Wheaton is BETTER than Mike Wallace.

“Markus Wheaton, and you take this how you want, is better than Michael Wallace at everything but one thing: speed. That’s it,” Clark said.

“He does everything else better.

“That’s not a knock on Mike. And it’s not saying Markus can be more productive than Mike, because the thing Mike did well, he did better than anyone else in the NFL. And that was run. But I think as far as route-running, (Wheaton’s) more polished.

“I think he has better hands. They both are extremely tough guys to be slightly built.”

High praise for a player that has yet to play one game in the NFL as of yet.