Steelers At Panthers Preview: Preseason Finale Goal – Get Out Healthy 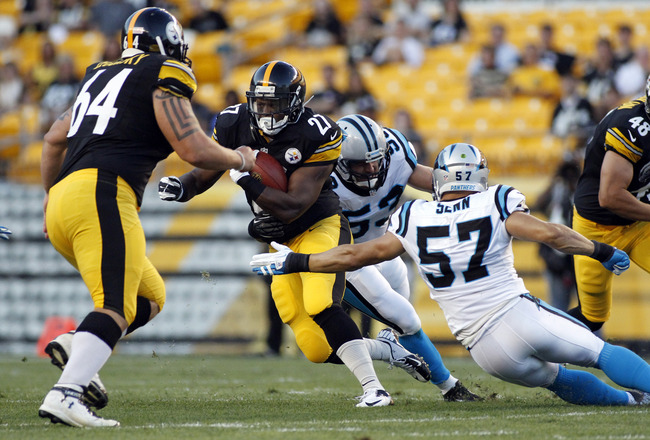 The anticipation and excitement of the regular season can be felt all accross this great nation. Only one more preseason game to endure. For the 11th consecutive year, the Pittsburgh Steelers will matchup against the Carolina Panthers in the most meaningless game of the year. With a few exceptions, the starters for each team will sit the game out.

The final preseason game is pointless in many ways, but I will try to find a few tidbits that Steelers fans may want to pay attention to.

Mike Tomlin will give rookie Landry Jones a chance to prove himself as an effective NFL caliber quarterback. Jones will be in for most of the game, which will be a great opportunity to learn and prepare for the season in game-like situations.

Based on what we’ve seen so far, the Steelers seem to be fairly stable at the quarterback position from Ben, to Bruce Gradkowski, to Jones. I expect Jones to find his young receivers and put up some good numbers.

Despite most of the starters sitting this one out, the offensive and defensive lines still need to put on a good performance to show fans they are ready for regular season football.

Rookie Jarvis Jones who is recovering from a chest injury will be sitting the game out as well. The fourth preseason game is the final opportunity for many borderline players to prove their worth to a professional football team.

Both the Steelers and Panthers, along with the rest of the league, will need to trim their rosters down to the mandatory 53-man roster by Saturday. Although this may be a meaningless game in many ways, for these “borderline” players, its put up or shut up.

The talent on the field Thursday night in Carolina may not be completely NFL worthy, but the effort and enthusiasm of the men on the field will be fun to watch.

The Steelers have had a rough preseason in terms of injuries and play on the field. The biggest struggle through the first three weeks has definitely been the special teams unit.

Like the Chiefs from last week, the Carolina Panthers also have a return for a touchdown this preseason and have had success in getting their offense great field position.

The most important aspect of this game will without a doubt be the performance of the Steelers special teams. The goal of this unit should not only be to prevent the Panthers from making big plays, but to create big plays of their own.

Many fans will not even bother to watch the game Thursday, but I can assure you that the Steelers still have areas of improvement and areas of concern.

Many of these areas, including depth at certain positions, special teams play, and the ability of the offensive line to play as one cohesive unit, will all be tested one more time before the season opener.

So sit back and enjoy the game as best as you can, Steeler fans and hope that these issues will work themselves out and more importantly, the players from both teams come out uninjured