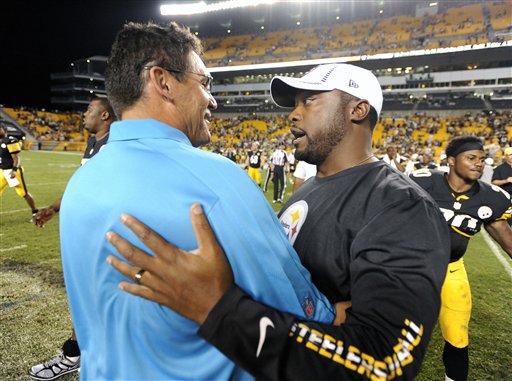 The final preseason game is traditionally a game in which final roster spots are earned and the biggest concern is walking off the field healthy. If you want to grade last nights performance based soley on the health of the team, then I guess the game was a success! Unfortunately, although the team walked away unscathed (at least physically) the play on the field against the Carolina Panthers pretty much summed up the entire preseason. Not all of it was bad, but for the majority of the game I could not help but simply shake my head. Here are my grades for last nights game.

The offense last night in my opinion played fairly well. Despite the fact that most of the Panthers starting defensive players saw little, if any playing time, Landry Jones and company moved the ball effectively. Jones played the entire game and looked like a solid 3rd string quarterback.When simply looking at the stat sheet, you would see 1 touchdown pass compared to 3 interceptions. Throwing interceptions is never a good thing and 95% of the time can be avoided, but two of the three picks were not necessarily his fault. Jones showed great footwork in the pocket and even when he was under pressure, he kept his eyes down the field and made plays.

David Paulson looked better than he had all preseason in both blocking and his route running and was rewarded a touchdown on the first series. Wide receiver Derek Moye played very well and has made a legitimate case for the Steelers final roster. The run game looked good and kept the offense moving on 3rd down. Great play from the offfense, but I will remind everyone one more time that the object is to score points.

When people around the league think of the Pittsburgh Steelers, they think of the defense. With a healthy Troy Polamalu and solid linebackers, many people would expect the Steelers will once again be a top 5 defense. The defense does in fact have some great talent on defense, but the lack of depth on the defensive line and secondary continued to show against the Panthers.The defensive line has struggled to get consistent penetration in the backfield and has allowed opposing quarterbacks like the Panthers Derek Anderson to make big plays. With great outside pass rushers in Lamarr Woodley and rookie Jarvis Jones, the defensive line must get some sort of pressure to close the pocket and not allow the quarterback to step up and make a play.

The secondary continued to struggle all night against Anderson and wide receiver Ted Ginn Jr. Ginn destroyed the secondary all game and ran right past the defenders almost as if they were standing still. In a division that has a lot of speed at receiver in the Browns’ Josh Gordon and the Ravens’ Torrey Smith, amongst others, this secondary has showed very little in terms of stopping the deep ball down the middle of the field. Chris Carter was one of the only bright spots on the defense and may have earned himself a spot on the final roster, finishing the game with 2 sacks and a forced fumble.

The only thing the Steelers special teams unit seemed to have accomplished was forcing touchbacks and fair catches. The struggles with this unit will hamper the team throughout this entire season. Reggie Dunn may be fast, but he needs to learn that in the NFL, sometimes you just have to make the smart decision and let the punt go into the endzone. Dunn caught the punt inside his own 5 yard line and ran back into his own endzone attempting to avoid defenders where he was tackled for a safety. This unit may not accomplish much this season, but they have managed the impossible and rendered me speechless.

The Pittsburgh Steelers and Steeler Nation will be glad to move on to the regular season and put this preseason behind them. Progress has been made throughout the past few weeks, but given the horrendous start in week 1, that does not mean much of anything. With six Lombardi trophies, the Steelers and of course the fans, will always have high expectations for the current team. High expectations or not, this team has a lot to prove as we now move on to the regular season. In all, this preseason has been full of mistakes and poor execution, and ultimately resulted in a 0-4 preseason. The positives in all of this? As of Friday August 30th, all teams records reset to 0-0. Take a deep breath Steeler Nation. The preseason is over.

Steelers At Panthers Preview: Preseason Finale Goal – Get Out Healthy
List of Players Cut by Steelers