There is a lot of blame to go around, much of which the Trib’s Dejan Kovacevic touches on in this blazing article today.

But with no noticeable running game yesterday, LaRod Stephens-Howling out for the year, the waiting game for Le’Veon Bell’s return, today’s resigning of Dywer, let’s delve a little deeper, is the problem the run game or the O-line, or both?

Humor me a little, because I think I knew the answer already and I will have to get into that a little more later.

I asked followers on twitter what year (of recent years) they viewed the running game to be most effective. Overwhelmingly 2005 came back as a top answer. So, here’s a break down of the numbers comparing the running backs in 2005 to those on the 2012 roster: 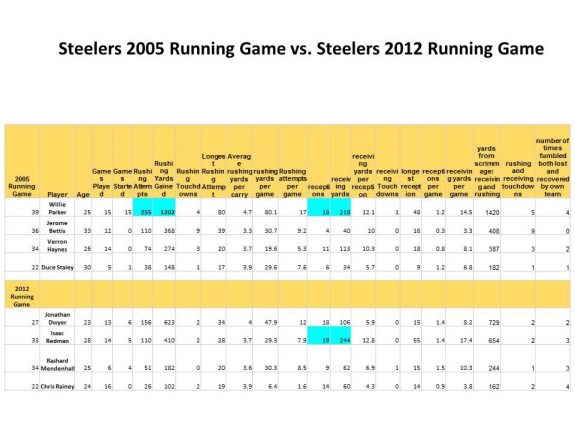 There are a lot of similarities, believe it or not. Isaac Redman’s rushing numbers are very similar to the Bus. Yes, look closely, they are. He also has similar receiving numbers to Willie Parker (see highlights).

The outlier, and the reason they likely drafted Bell, are Parker’s rushing numbers. No one catches those on the 2012 roster. This is not rocket science and we all recognize this, but we don’t need the Bus, we need a new Willie Parker.

Dwyer and Redman have similar strengths which you can see from the numbers, which explains a little more the initial Dwyer cut.

But don’t worry, he’s back, re-signed today if you haven’t heard.

The problem? Not one of these stats matters if the O-line can’t block anyone.

No matter the play called, they all need to increase their blocking skills.

Were these numbers a surprise to you?

Feel free to tell me in comments!

You can find me @steelergurl on twitter or at steelergurl.com