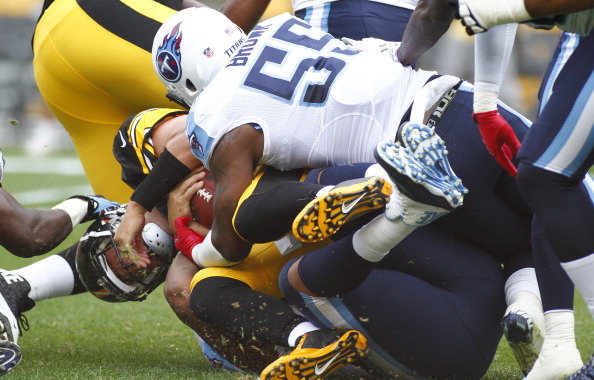 Where do you even begin?

A 7-point loss, an offense that was nearly shut out, a roster that now has even more players banged up.

Let’s just say the 2013 season didn’t exactly get off to a strong start for the Steelers.

They will have a lot of soul searching to do following a 16-9 loss to the Tennessee Titans, a team that won six games in 2012.

The Steelers were dominated by the Titans defense, they failed to score on offense, and their best shot at a score came when Isaac Redmen fumbled inside the five to stop the best chance to score all day.

Instead of correcting their mistakes and getting better, instead they got worse, not scoring and never looking in sync the entire day at Heinz Field.

Ben Roethlisberger was harassed by the Titans defense, as he was sacked five times, and the QB on the day went 21-for-33 for 191 yards with TD and a pick.

The Steelers run game was about as bad as it could be, as Redman fumbled twice, LaRod Stephens-Howling led the ground game with 19 yards on 6 carries.

The longest carry of the day for any Steeler back was Redman, who had an 8-yard carry. The guy who was supposed to be the starter had just 9 yards on 8 carries, a 1.1 yard per carry average.

It’s not all his fault, as the offensive line was terrible, and with an early injury to center Maurkice Pouncey, the offense was never close to the same.

The defense didn’t play all that well either, as they never were able to get any type of big plays, and they allowed just too much to Jake Locker and the Titans offense.

Locker was just 11-for-20 for 125 yards with no touchdowns, and no picks, but he was sacked just once, and did enough with his legs to avoid the Steelers rush.

Tennessee’s run game was led by Chris Johnson, who had 70 yards on 25 carries. Again, he didn’t do much to beat the Steelers, but did enough to keep them going.

The Titans outgained the Steelers 225 to 195, and most of those Steelers yards came in the final quarter on the final drive.

Pittsburgh also didn’t do a good job in time of possession getting beat there as well 34:01 to 25:09

The injuries are going to be a major problem, as Pouncey (knee), running back LaRod Stephens-Howling (knee), inside linebacker Larry Foote (bicep) and cornerback Cortez Allen (ankle) all were injured in the loss.

None of those players left, and the players that came in for them didn’t play all that well either.

Redman’s two fumbles may have the Steelers on the phone Monday morning, calling former RB Jonathan Dwyer, who led the team in rushing last season and was cut in final cuts.

Le’Veon Bell is still trying to work his way back from a mid-foot sprain, and without he and TE Heath Miller, this offense looks like it could struggle to score 7-10 points a game.

For now, the entire AFC North is 0-1, as the Bengals and Browns also lost in early action.

The Steelers will have an extra day to get their players ready, as they will play the Bengals in Cincy next Monday night.