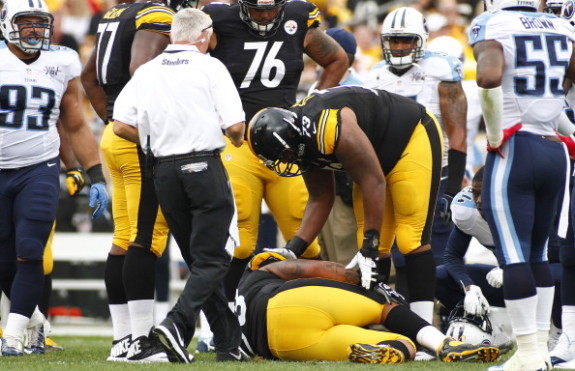 There was plenty of moments this past season that has the Steelers sitting at home today instead of getting set for a wild card matchup this weekend.

There was plenty of ups and downs, and many more of them were downs to start the season, and it was that 0-4 start that in the end really killed the teams shot to win the division or be a wild card team.

Today, as we start the look back at the 2013 season for the Steelers, we look at five plays that cost the team a chance to play for a 7th Lombardi Trophy.

1. Maurkice Pouncey Gets Cut Block By A Teammate To End His Season – Hopes were high in week one, and the Steelers seemed primed for a week one win over the Titans, getting a gift safety on the opening kickoff of the game. They were driving for more points after the free kick when eight plays into the drive David DeCastro fell on Pouncey’s right knee, tearing ligaments in the right knee of the center. The Steelers lost the game 16-9, but more importantly lost Pouncey, maybe the best center in football, for the season.

2. David Paulson’s Week Two Fumble In Cincinnati Turns The Tide – Sitting at 0-1, the Steelers headed to play the Bengals on Monday night football. They looked very good early, and led 3-0 when Ben Roethlisberger his backup TE David Paulson with a pass, and Paulson had room to run. As he rumbled and was being tackled, Paulson fumbled the ball at the Bengals 13-yard line, and the game totally changed in the eventual Bengals 20-10 win. If the Steelers keep the ball and go up 6 or even 10-0, the game has a different feel to it all together.

3. Big Ben Fumbles In London In The Final Seconds In A Loss To The Vikings – The Steelers had fallen behind big in London to the equally bad 0-3 Vikings, but had all the momentum as they rallied from down 34-17 with five minutes left in the third quarter to down 34-27 with the ball at the Vikings 6 with 19 seconds left. An offensive line that was porous all day was again beaten, and Everson Griffen stripped Roethlisberger of the ball on the 6-yard line Kevin Williams recovered the fumble to seal the victory. It was the first time since 1968 the Steelers sat at 0-4.

4. Terrelle Pryor Races 93 Yards On The First Play From Scrimmage In A 21-18 Loss To Oakland – After going 0-4 the Steelers recovered to get to 2-4 and headed to Oakland for a key game October 27th vs the Raiders. Going in the focus was on making sure not to allow Raiders QB Terrelle Pryor to come up with a big play using his legs. On the first play from scrimmage, Pryor made the Steelers look silly, as he faked a handoff to Darren McFadden and sprinted a record 93 yards for a TD to make it 7-0 Raiders. It was the longest touchdown run ever by a quarterback and helped Oakland to a 21-18 win that was as painful as any in 2013.

5. Two-Point Conversion Falls Short In Last Minute In Baltimore – Anytime these two bitter rivals go at it, more than likely it will come down to one key play. It did Thanksgiving night vs the Ravens, as the Steelers rallied for a touchdown on a 1-yard pass from Ben Roethlisberger to Jerricho Cotchery to make it 22-20 with 1:03 to play. Needing two, Roethlisberger went left to Emmanuel Sanders, and the pass slipped through the hands of Sanders, who was screened by Chykie Brown. The Ravens would go on for the win, and Sanders felt the wrath of Steeler fans, who felt he should have come down with the pass.