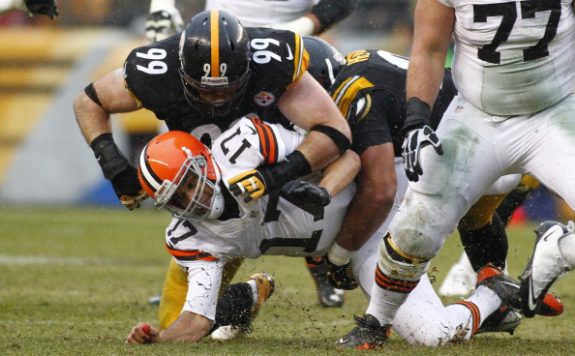 For the second straight season the Steelers won their final game of the season to wrap up a season at .500 at 8-8.

Unlike last season though, the club had a lot more to play for Sunday, as they needed a win and early losses by the Ravens and Dolphins to keep their playoff hopes alive.

They took care of business beating the Browns 20-7, and got favors from the Bengals and Jets, who beat the Ravens and Dolphins, knocking both out of the postseason.

The Steelers needed one more favor, and it’s a big one – a win by the Chiefs, who are resting nearly all their starters, over the Chargers.

As for Sunday, the team played more than well enough to beat a Browns team that dropped 10 of their last 11 games.

Le’Veon Bell ran for 90 yards and a touchdown, and passed Franco Harris for most yards from scrimmage by a rookie.

Ben Roethlisberger threw for 179 yards and a touchdown with two interceptions in a steady rain.

Jason Campbell went 23 of 40 passes for 240 yards with a touchdown. Overall it was the 7th straight loss for Cleveland, including setbacks to the Jaguars at home and the Jets.