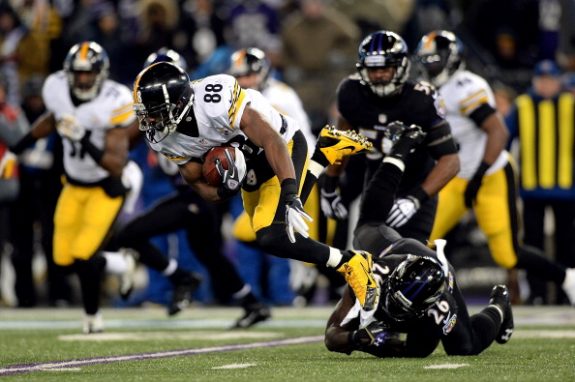 With a simple drop of a two-point conversion, the Steelers season that appeared well on the comeback trail burst like an overfilled water balloon.

Now at 5-7, the chances of completing the comeback to the point of making it to the postseason seem all but over.

Emmanuel Sanders picked a bad night to have his worst game of his career, dropping at least three passes, a TD and a two-point conversion as the Steelers fell hard to the rival Ravens 22-20.

It was a bizarre night on a number of fronts, from a kicker running up to try and kick too quickly, to a pair of called Steelers TD’s being taken away late in the game.

The first TD was called down at the one when Heath Miller‘s knee hit the turf before he fell into the end zone.

The second TD called back was even more frustrating, as rookie Le’Veon Bell, who played an excellent game, had his helmet popped off as he crossed the goal-line.

While it was called a TD, the officials overturned it do to the ever puzzling ‘dead play’ the moment a players helmet comes off.

Mind you in seeing a lot of players helmets come off, I have never once seen that call made.

Nevertheless, Ben Roethlisberger collected himself and threw a one-yard TD on fourth-down to Jerricho Cotchery with 1:03 left to play.

Down two, Roethlisberger threw left to Sanders, who was screened by Chykie Brown, but still had the ball in his hands, only to allow it to bounce off the turf, saving the win for Baltimore.

It was the fifth straight game between the teams decided by three points or fewer.

It stings as the Steelers allowed Baltimore to build a 13-0 lead in the third quarter, but fought back to get it to within six at 13-7, and then within two at 22-20 before falling short.

Roethlisberger was 28 for 44 for 257 yards and two TDs, and Bell ran for 73 yards on 16 carries, with a 43-yard run to get the team close on their first scoring drive.

The team has 10 days to heal up, and three of their last four are at home, the first being on December 8th against the Miami Dolphins.

Steelers Gab 2013 Week 13 NFL Preview – Pittsburgh At Baltimore
Tomlin On The Ravens Loss: “Not Enough On Our Part”