Tomlin On The Ravens Loss: “Not Enough On Our Part” 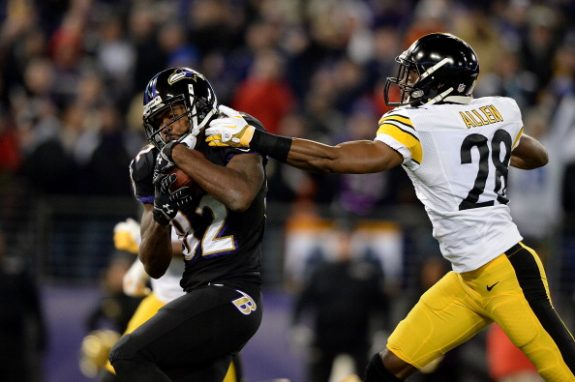 Opening Comment: It’s was a hard fought football game. Not enough on our part. But it’s typical Steelers-Ravens in terms of it being nip and tuck. Not enough plays, particularly down the stretch. I appreciate the effort of the guys, but we didn’t come here with effort in mind. We came here to win. We take responsibility for not doing that. Tomorrow we will assess it, analyze it and move forward. A number of injuries in the game: Brett Keisel hurt his foot, Kelvin Beachum hurt his knee, Mike Adams hurt his ankle, (David) DeCastro hurt his foot, (Fernando) Velasco hurt his ankle. I don’t know the status of those guys. Many of those guys are being examined. Le’Veon Bell sustained a concussion. Not enough today, unfortunately. Congratulate those guys on a hard fought game.

What happened on field goal attempt?
We were doing it on a cadence to slow down their rush and the crowd noise. I don’t think Shaun Suisham heard the cadence. I think he started to the ball early and of course created the situation where we weren’t able to get the play off.

Can you talk about the fine line replay plays in the game? You thought you had the touchdown, but it was at the half yard line. How does a coach adjust to that?
I am compensated enough to do that. We have an effort to get the game as clean as we can do it. Those guys do the best that they can. I am not going to judge it from that standpoint.

Why was Emmanuel Sanders the primary target on the two-point conversion after having a couple of drops in the game?
I didn’t say that he was.

When Le’Veon Bell’s helmet came off, was that the right call?
That is the call that they made. I understand the rule that when a runner’s helmet comes off the play is over. The issue I had I was told on the field the touchdown was confirmed by multiple officials. Then they reviewed it. That is my issue from a mechanics standpoint. I understand the rule, when the helmet comes off the play is over.

Can you describe what happened on the kickoff return where you were on the field?
I always watch the returns on the jumbotron. It provides a better perspective for me. I lost my placement as he broke free. I saw it at the last second and saw how close I was to the field of play.

Do you think you interfered at all with the play?
No.

We saw you chuckle when they showed you on the board. What was your reaction at that point?
They always like to show me on the jumbotron here in Baltimore. I appreciate that.

Do you know you are not supposed to be on the six-foot wide white stripe?
Tell me something I don’t know. I do it quite often like everybody else in the National Football League. I was wrong. I accept responsibility for it.

Big picture, 5-7 with four left you have to win out, right?
We’ll assess it tomorrow. We played tonight. That’s what I just told the football team. We’ll stick to that. Tonight we accept responsibility for not doing enough and we’ll congratulate them for doing it.

Do you have any quick analysis of the third down breakdowns and their conversion rate?
I don’t.

Thought of the offense playing well at the end, but took a little while to get going?
It’s life in this series. You guys have seen enough of these Steelers-Ravens games that you know style points are going to be less important than mettle and finish. It’s not going to be perfect when you play these guys. I am sure they have the same assessment of it.