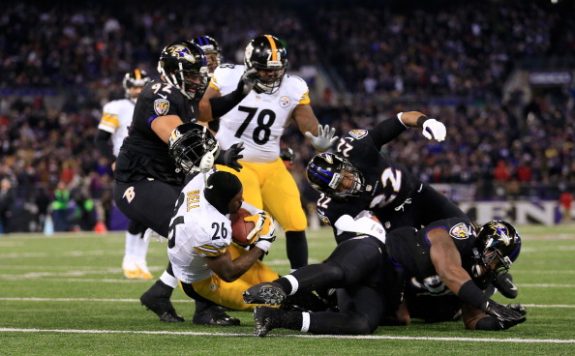 It may have been the last stand for the Black and Gold Thursday night, as now at 5-7, the season that had been on the brink the last few weeks now looks like it’s basically over.

The team now only suffered a tough two-point loss, but they also will come back home with a number of injuries, and a number of them are starters.

First there’s the injury to rookie RB Le’Veon Bell, who went down in a heap late in the game when it appeared he scored the game-tying TD.

The team said that Bell suffered a concussion, and will have to go through the proper tests to be able to return to the team.

DE Brett Keisel left the game with a left foot injury, this after he was just coming back off the injury after missing two games.

G Kelvin Beachum was part of the walking wounded late in the game, as he suffered a knee injury, and then his replacement Mike Adams suffered an ankle injury.

On the play before the Steelers touchdown to make it 22-20, Fernando Velasco got rolled up and suffered an ankle injury, and even David DeCastro suffered a foot injury.

Despite all the issues with injuries on the line, the Ravens didn’t get to Ben Roethlisberger, ending their streak of at least one sack in 22 straight games.

Tomlin On The Ravens Loss: “Not Enough On Our Part”
Did Tomlin Know What He Was Doing In Jones’ Kickoff Thursday Night?