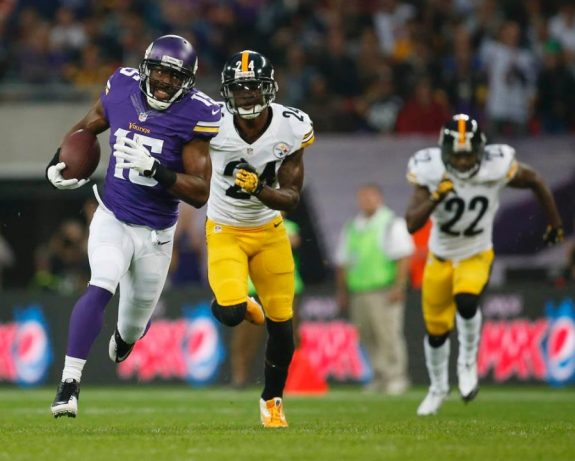 The Steelers made a trip overseas hoping to figure out some of the lingering issues that have haunted them so far in 2013.

Instead, it looks more than ever this organization has hit rock bottom.

That fact was more and more evident after the Vikings offense seemed to have their way with the Steelers D in a 34-27 loss that puts the Steelers at 0-4 for the first time since 1968.

The Steelers showed signs of growth on offense, with rookie Le’Veon Bell rushing for two scores, but allowed two TD’s each on defense to Adrian Peterson an Greg Jennings.

The Vikings torched the Steelers D for four plays of over 50 yards or more, this with backup Matt Cassel who was playing for the injured Christian Ponder.

Jennings made a 70-yard catch-and-run for a touchdown and Peterson had a 60-yard score to help the Vikings build a 34-17 lead, and then held off the Steelers at the end with a sack and fumble of Ben Roethlisberger inside the Vikings 15-yard line in the final seconds.

Roethlisberger was 36 for 51 for 383 yards, with one touchdown and one interception.

Cassel beat the Steelers for the second time in four seasons, as he went 16 of 25 for 248 yards and two touchdowns.

The Steelers did not get a turnover or a sack, their fourth game without recovering a turnover.

Roethlisberger threw a pick and the fumble at the end killed their last shot at a tying score.

The team will be on bye next Sunday, and then will play in New Jersey against the Jets in two Sundays.