What The Steelers Are Saying About Monday Vs Cincinnati 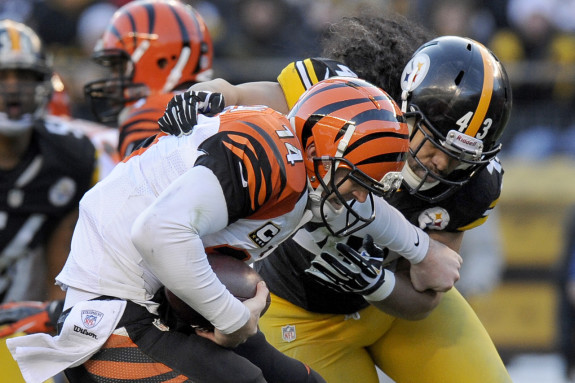 Isaac Redman on the run game: “We just need to work to get better, starting with myself. “I need to take care of the ball better. It was an all around bad game for the running game. It’s really a whole group effort.”

Redman on getting the ball again in week two: “The most important thing is to be confident and put everything behind you. In this league you have another chance and Monday night I am going to go out there, put it behind me, play and do what I do.”

Ben Roethlisberger on confidence: “No, it’s not confidence-threatening. “We lost a game in week one. Yeah, we didn’t play very well at all on offense, but there’s no time to panic right now.”

Mike Tomlin on Last Week and getting better: “We didn’t play well. “Not only in the offensive line, butjust as an offensive unit or as a football team. Obviously, losing Maurkice Pouncey was a blow to the group, not only in terms of what he’s capable of, but emotionally, the manner in which it happened. Hopefully, we’ll put those things behind us.”

DC Dick LeBeau on Bengals TE’s and A.J. Green: “Well, the more weapons they have, the tougher they are to defend. They have two really talented guys there. I would rather have three real good tight ends and no A.J. Green. I’ll put it that way. It gives them a good combination. They have a similar personnel package there that New England had when they were rolling their two tight ends. In fact, they [New England] probably didn’t have a receiver as good as Green. They have a good running back and now a veteran quarterback. They are a formidable offense, no doubt.”

LeBeau on going against former Steeler James Harrison: “I’ll be honest with you, I haven’t seen their defense. I don’t even know where James is playing. But I know this, wherever he is, he will help them. He has a defensive demeanor, and that helps any team. I don’t even know what they are doing with him.”

OC Todd Haley on the message this week: “Well, we have to be better, number one. We can’t turn the football over and expect to win. Protecting the football has to be a priority for anybody touching it. We’ve got to be more efficient in the run game, clearly. We’ve got to stay on the field. After the first drive, third downs, things like, everything went downhill, and we have to be better across the board. Just execute and do your job and better things will happen.”

Haley on the running back situation and how the carries will get split up: “As the week goes on we’re still working through that. We need Isaac to bounce back and play a better game. He didn’t play his best game, along with really all of us. We didn’t coach our best game. Everybody has got to bounce back and play better football, and better things will happen.”