What The Bears Are Saying About The Steelers 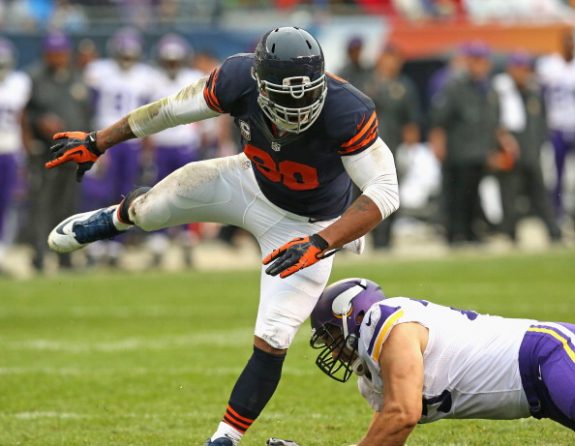 Bears QB Jay Cutler on the offense and protection: “I am much more comfortable, I think. Not as comfortable as I want to be with these guys yet. That’s just a trust factor. The more I watch film, the better I feel about it. Just sitting back there in the pocket and going through my reads and trusting we’ve got the protection we need.”

Cutler on the Steelers D: “Like our defense, except 3-4, so you have a bunch of veteran guys that have been in the system for a long time. They know the ins and outs. They know the strengths and weaknesses of their coverages and the fronts. They’re really solid. They show you a lot of different looks so you’ve got to be prepared.”

Bears coach Marc Trestman on facing Ben Roethlisberger: “They’ve got a Hall of Fame quarterback who has the ability to extend plays like no other quarterback to my recollection. We have to be relentless to the ball. We have to keep our contain lanes. That’s one of the areas we’ve got to improve on.

“Last week Ponder got outside the pocket two or three times. We’ve got to do a better job of containing it, and we certainly have to do it with Ben because he’s really the best at it. There are a lot faster quarterbacks in the league, but I don’t know that there’s been one any better over the last decade at extending plays under the chaos of a pass rush better than Ben Roethlisberger has done it and made bigger plays than he has over his career.”

Trestman on facing the Steelers D: “They’re different than what we’re used to facing. They’re coming from everywhere. They’re certainly as well of a coached defense as there’s ever been with Dick LeBeau. We all respect the heck out of him and what he’s done.

“We’ve got a formula for picking up blitzes. Things change a little bit with the 3-4. But we’ve had a lot of work against it. I spent time on it in our OTAs, a little bit of time at training camp. We played against a 3-4 team in the preseason, which helped. But certainly there’s nothing like going against the Steelers’ 3-4. It’s very good conceptually. It’s structured. It’s very good, as are the guys who play it.”

DC Mel Tucker on facing Ben Roethlisberger: “He’s one of the tougher guys to get down on the ground. And even when you’re hanging on the guy, he still makes a throw down the field. And when he scrambles, he’s looking to throw. He can throw it 60 yards on the run. He’s a rare guy in that way. It’s going to be a huge challenge for us.”

Defensive end Julius Peppers on Ben: “It’s one thing to get there. But when you get there you have to get him down and we’re going to need a group effort to do that.”