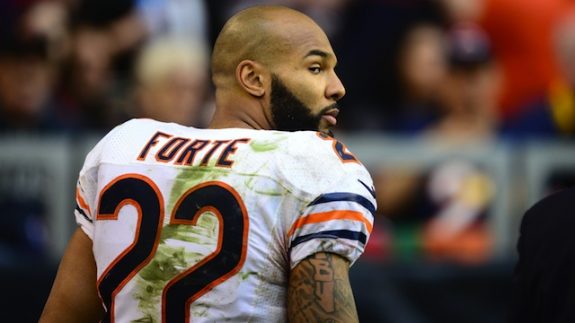 The Steelers will play their first NFC North battle of the season Sunday night at home vs the Chicago Bears, and there’s plenty on the line as the black and gold try to avoid going 0-3.

The Bears have played two tough games, both at home, and came out on top against the Bengals and the Vikings, and will play on the road for the first time in 2013 Sunday night.

Here’s a couple things to look for about the Bears in our scouting report about the “Monsters of the Midway.”

1. Bears Want To Put Pressure On Ben – In a story today, Julius Peppers said that the Bears pass rush, which has been pretty blah so far this season, will be better and will pressure the Steelers QB. “This week it’s going to be improved,” Peppers said. “I’m not interested in talking about anything from last week. My focus is on Pittsburgh and getting better.” Andy Dalton and Christian Ponder have had plenty of time to throw in the first two weeks, and hopefully Ben will as well.

2. Third Downs Have Been a Major Issue for Bears – It’s been an area that teams are killing the Bears in, and that’s converting third downs. This season in two games, teams are 14-for-27 in converting third downs, and Chicago is are tied with the St. Louis Rams for the worst rate in the NFL. The Steelers last season got off to a hot start converting 3rd downs before cooling down, and hopefully Sunday night when they find themselves in that situation, they can make things happen.

4. Hester is Still Hester – Kick returner Devin Hester is still one of the most dangerous return men in the game, and it showed this past week as he was named NFC Special Teams Player of the Week for an NFL-record 13th time. He set a franchise record with 249 kickoff-return yards on five returns. “I can’t remember a game where I had five returns,” Hester said. He can change a game in about 10 seconds with a return, and the Steelers can’t fall asleep on him Sunday night.

5. Forte Getting a Lot of Work – Bears workhorse RB Matt Forte is a player that he Steelers can’t lose sight of on Sunday night, as he’s been involved with a lot of the Bears offense early in the season. In two games, he’s in on 41.7 percent of the plays for Chicago’s offense, as compared to 29.2 a season ago under Lovie Smith. He’s good at making catches out of the backfield, and also seems he can make players miss in the open field. In two games he’s getting targeted 8.5 times per game, and pulling in 7.5 passes per game. It’s something the LB’s for the Steelers have to be aware of.