The QBs and the O-Line: How the AFC North Stacks Up 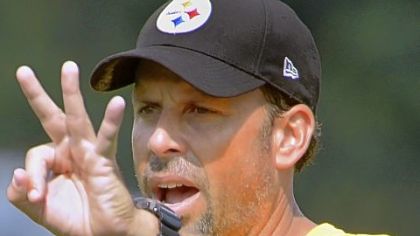 As we enter week 3 of the season, it’s becoming clear how the quarterbacks and the O-Lines will stack up helping to put more Ws in the column than Ls. It’s not looking great for the Steelers. The one bright light at the end of the tunnel, the Browns have bigger problems, believe it or not.

So, based on stats for the first two games, excepting the Browns since Weeden is out due to the injury he received last week against the Ravens, here’s how the QBs look: 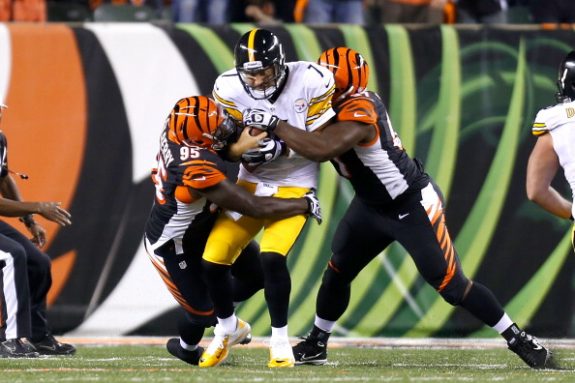 So far, I think the numbers tell an accurate story of what we’re seeing on the field. Ben’s accuracy has been off, his ability to scramble which is often his strength hasn’t been the same as years past. Interestingly, Dalton, according to the numbers has the most consistency and leads the division. Flacco could certainly surpass Dalton in upcoming weeks, will be interesting to watch.

We all know that the offensive line plays a big role in how well a QB plays. While there might be a lot of talent on any one of the lines, it only takes one person to miss an assignment or get beat for the line as a unity to function poorly. I think that’s what we’re up against in Pittsburgh. There’s a significant amount of talent and investment frm the last few drafts on the O-line, however as a unit, they function poorly.

Let’s take a look at how the O-lines across the division compare.

Zierlin notes that the ravens guards are better than their tackles. Last year they allowed 38 sacks, but that number should decrease this year. Michael Oher is the weak link, especially in pass protection on the line. If they have consistency at guard and even one of the tackles steps up, Flacco’s ratings are sure to improve and the Ravens add Ws to their win column.

The Bengals O-line gave up 46 sacks last year – the most in the division. They have good talent and an overall average line. Some of those sacks were more from Dalton’s indecisiveness rather than the line’s lack of ability. This year, Dalton is better. They still need more from Green-Ellis and they added Tyler Eifert, who we saw will be a big target for Dalton (watch him beat both the corner and safety against the Steelers last week, yick!). Still, the Bengals are weakest on pass protection. But overall, they have the most potential to beat the Ravens for that top spot in the division. (hurts me to admit it, but it’s true)

The Brown’s are one of the youngest and most underrated offensive lines in the League, let alone the division. That said, the Steelers also have a young line and you see where that’s got us. Last year they showed decent pass protection. Problem now is that 1) no Trent Richardson and 2) no Brandon Weedon. The Browns will start 3rd string Cleveland native Brian Hoyer this week now that Weeden is injured. Why they don’t start Jason Campbell is beyond me, but the coaches seem to think Hoyer offers what they need to beat the Vikings. Right now, I am unsure of the complete vision and strategy the Browns front office seems to have. In my opinion, the line has another year to work on becoming a fluid unit while the Browns clearly will be gunning for a franchise QB in next year’s draft as well as other key players.

And finally, saving the worst for last. The Steelers O-line. In 2012, the line wasn’t healthy and in 2013 they just seem to be bad. Individually, the O-Line is full of talent. David DeCastro was a 1st round pick, Mike Adams a 2nd rounder. Adams gave up 7 of the 37 sacks the O-line accounted for in 2012. They all need to do better on their assignments. Missing Pouncey is a problem, but veteran Fernando Velasco who replaced Pouncey played better than most last week in his first game with the Steelers. Until this O-line gets better, reads defenses better, and doesn’t miss assignments or get beat play after play, the Steelers can’t win. The defense can’t stay on the field as much as it did against the Bengals. They will be tired long before week 16 with that kind of time of possession. The line is the key. The offense being on the same page as Haley and just getting the job done is essential to getting through this mess of a season.

It’s not pretty, but it can improve – how much is subjective.

You can find me on twitter @steelergurl or read more on my blog at steelergurl.com.