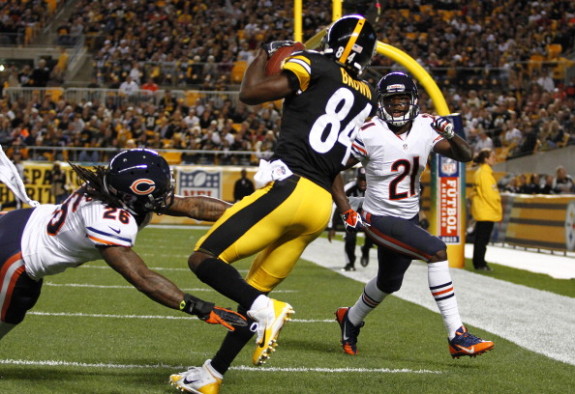 Another turnover plagued game by the Pittsburgh Steelers ultimately resulted in a Steelers loss to the Chicago Bears Sunday night.  At times the Steelers showed flashes of improvement and the capability to put points on the board, but 5 total turnovers resulting in 23 Chicago points simply will not cut it.  It was another ugly game at Heinz field…Here are my week 3 grades:

Early on, Ben looked very uncomfortable and was forcing the short thows and overthrowing the deep balls.  After a couple big runs by Dwyer, Ben and the offense seemed to get settled in.  Even when he was under pressure, Ben would stand his ground and keep his eyes down field, finding Heath Miller and Antonio Brown for big gains down field.  For weeks, the offense has been lacking a leader to step up and provide some sort of spark.

The spark Sunday night came from Antonio Brown who was playing with great speed and was making some tremendous catches.  But the 2013 trend of the Pittsburgh Steelers is that everytime the offense does something good, they follow it up with a horrible play that completely erases the positives.  The offense played very well, except for a few crucial turnovers.  It does not matter how many yards an offense puts up, if they fail to put points on the board or allow the opposing defense to score, you are not going to win games!  Offensive Grade: B-

Like the offense, the defense struggled early in the game and allowed the Bears to put up easy points.  I was very pleased how the defense played with emotion and were very aggressive late in the first half and the entire second half.  Lawrence Timmons and Lamarr Woodley brought good pressure throughout the game and kept Jay Cutler from finding receivers deep.

Although the game was high scoring, it is hard to put all the blame on the defense, especially when 14 of the 40 points were defensive scores for the Bears.  Good outing by the defense for three quarters.  Unfortunately, there are four quarters in a football game, and even points given up early in the game will eventually come back to haunt you.Defensive Grade: B+

Going into this game I was extremely nervous about the shaky special teams  unit of the Steelers going up against one of the greatest return specialists in NFL history in Devin Hester.  The Steelers never let Hester gain momentum on his returns and even avoided him all together with squib kicks on the kickoffs.  The Bears returners were consistently being gang tackled and taken down quickly.  Despite the game already out of reach, Troy Polamalu came off the left side of the offensive line and blocked a late game extra point.  Given the awful start to the season for this unit, I am very happy with the adjustments and vast improvements by the special teams lately.  Special Teams Grade: A-

A loss is a loss no matter how you look at it.  The Steelers were underdogs coming into Sunday night and at times played like the underdog, but the improvements on both sides of the ball are promising for a team that seeks to find any kind of hope for the long season ahead.  As always, I am interested in hearing your take on the game and want to know the grades you would give each unit!