Mike Tomlin Post Game Comments On The Loss To The Bears 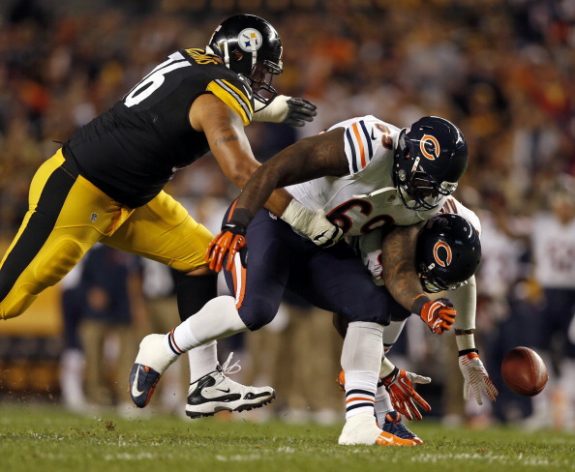 Opening Comments: “Obviously your not going to win football games when your turning the ball over in the manner in which we did. It produced direct points, it produced other point opportunities, you are not going to beat anybody in the National Football League playing like that.”

On rotating tackles all game: “They hadn’t played well enough to justify otherwise. “We’re going to look at viable guys. We’re going to turn the stones over in an effort to find a winning formula, and we’re not going to be bashful about that. Kelvin Beachum has earned an opportunity to play in the rotation. He did tonight because of it.”

On Heath Miller coming back: “He was on a snap count for obvious reasons for his action, it was a good start we’re going to continue to progress with him, obviously it was a positive thing having him back in uniform and he was an asset to us tonight.”

On The Challenge of going and playing in London Sunday vs the Vikings: “It’s not different for us until we get there. We don’t go until Thursday after our work is done, so between now and then it’s business as usual. That’s the approach we need to take, we have a lot of work to do obviously. So that is the approach we will take, we’ll deal with London when we get there.”

On Felix Jones Not playing after the fumble: “That was an element of it, obviously he took a legitimate hit there, I wanted to make sure he was okay, he was, he did get back in the game, but not a significant opportunity to contribute after that obviously the game got a little bit one-sided at that point.”

On Ben Roethlisberger’s Night with the Turnovers: “We need to take better care of the football, I am not going to characterize it in any way other than that.”