RB Redman Says He Suffered A Concussion; Steelers Say He Did Not 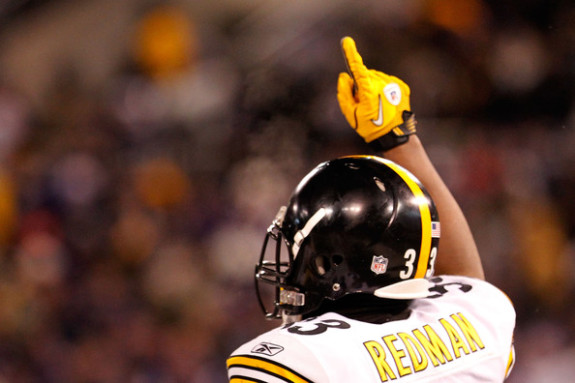 Isaac Redman clearly was in the doghouse against the Bears, and now there’s a debate as to why that was.

Redman came out and claimed that he was suffered a concussion against the Bengals in the 20-10 Monday night loss two weeks back, but the team is claiming otherwise.

The bad news is that the Steelers have another problem. The good news is that it’s not directly related to their crappy performance this season.

Pro Football Talk put out the following about Redman, basically making him totally sound like a faker when it comes to a concussion.

“Isaac was taken out of the game, and we announced that he was being evaluated for a concussion,” the team said in a statement released to PFT. “He was then taken through the proper protocol by our medical staff and it was deemed he was cleared to return to action after multiple examinations. He then re-entered the game and saw action shortly thereafter and throughout the rest of the game.”

Now mind you Redman claims he said that he was able to talk the docs into letting him practice, and he did practice throughout the week, and was in uniform on Sunday night in the 40-23 loss to the Bears.

This is clearly not a good situation for Redman to be in. He’s was downright bad for two games, and Jonathan Dwyer stepped up and ran hard in the loss Sunday night.

With Le’Veon Bell on the way back, it could be the end for Redman. This latest does not make him look very good in the eyes of the coaches.