Tomlin On AP, Bell, Miller And Getting A Win 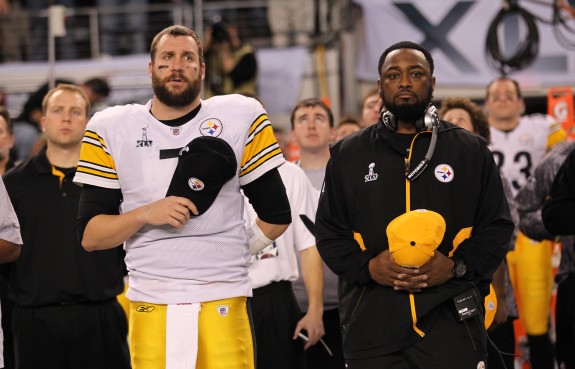 Q. In this game, how do you attempt to neutralize Vikings running back Adrian Peterson?

A. It starts with containment, not only on the play-side but also on the back-side. You have to reduce the amount of field your defense has to cover, because you can’t play him on a 53-yard field. That’s too much grass. We have to do a nice job of setting the edges. It starts there for us, particularly as a 3-4 defense, with our outside linebackers. I expect them to do that. The next thing is we have to do a nice job of eliminating vertical holes that are associated with crack-blocks and bunch formations. They do a nice job of that. Those are the two critical areas for us in reducing the amount of grass we’ve got to play in.

Q. Tight end Kyle Rudolph has one of the Vikings two touchdown catches so far this season. Does he remind you of the Bengals’ Tyler Eifert?

A. Eifert is probably a little faster. Those were the reports on those guys when comparisons were made during the draft process. They’re two top-quality tight ends.

Q. As for the Vikings pass defense, it has had some issues dealing with tight ends, particularly in the red zone. Did that show up on the videotape?

A. I really can’t say that. A lot of the time when you’re experiencing the things that they’re going through, like we are, a lot of it has to do with the turnover game. They’ve turned the ball over some, they’ve put their defense on short fields, they’ve given up some plays in the kicking game. A lot of that attributes to the position they’re in.

Q. Middle linebacker Erin Henderson has two of the Vikings’ four sacks. What has made him effective in that area?

A. He does a nice job of adding to blitzes. Often, he’s a guy who has a running back in coverage, and if that running back blocks he does what we call hug-blitzes. He adds to the pressure, and a lot of his pressure and disruption has been because of that. It takes a certain knack to recognize when the guy you’re assigned to cover is blocking and then to add to a blitz. Henderson does a nice job of that.

Q. Was this week of preparation for this game normal in any way?

A. Actually it was normal in most ways, in a lot of ways, really, up until Thursday night when we left for London. Up until that we took a normal approach to our preparation from a scheduling standpoint in the work that we did and the location from which we did it. We had a lot of normalcy in the front part of the week, which is important from a planning standpoint.

Q. What are the things this team has to work on to get that first victory of the season?

A. It’s obvious – ball security. You can’t win in this league if you’re turning the football over, and that’s been a focus of ours and will continue to be until we get the positive results we’re looking for.

Q. Do we see Le’Veon Bell against the Vikings?

A. Yes, you will, and we’re excited about watching him for the first time. As for the amount of snaps, we’re going to play that by ear. We acknowledge that he’s not in tip-top football condition and the only way to get that is by playing, and he hasn’t done that a lot. We’re going to keep an eye on him and monitor that throughout the game.

Q. What about the progress of Jonathan Dwyer?

A. I think he’s doing a nice job, not only as a running back, but he’s adding value to himself by being a strong participant in special teams.

Q. Did the offensive line take a step forward in the game vs. the Bears?

A. I thought it did, but it’s not about steps forward. It’s about winning football games. Obviously, taking steps forward is a part of that, but I’m not measuring success on the curve. Our job is very clear and simple to us, and that’s to win football games.

Q. In your opinion, is Kelvin Beachum a starting offensive tackle?

Q. The Steelers had to travel by plain, train, and then by bus to get to the team hotel in London. Are you concerned that the Vikings were on site for the game for six days?

A. I’m not. I tend to focus on the variables that matter, and those variables are our preparation and ultimately our play.

Q. Will Heath Miller get more snaps vs. the Vikings?

A. Yes. It was a positive start for him a week ago, and there have been no negative repercussions of his play, and so we look forward to his role continuing to grow.

Q. Have you asked Ramon Foster to assume more of a leadership role within the group of offensive linemen?

A. It’s not something I’ve had to ask him to do. He understands that it comes with being him under the circumstances. He’s been in a lot of battles with us, he’s been around here a long time, he understands the culture we’re looking for, and he particularly understands how we need to conduct ourselves particularly in moments of adversity. He’s done a nice job of embracing the leadership role in that regard.

Q. What are the keys for the Steelers today?

A. Focusing on the things that are within our control, with ball security obviously being one of those things. Defensively we have to stand up in those critical moments of a game and deliver, and special teams needs to be an asset to us in the return game.

Cassel To Start For Vikings Vs. Steelers
Steelers Legend L.C. Greenwood Passes Away At 67