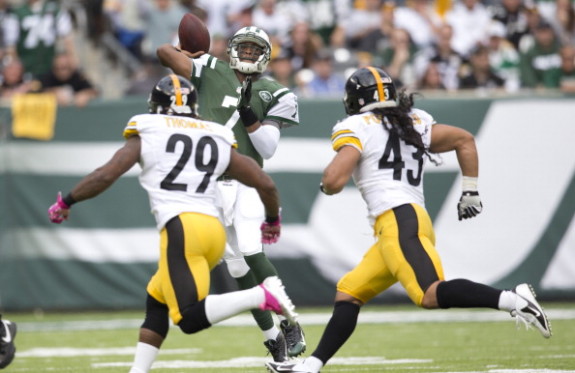 The Steelers have a lead at the half, albeit a small one, 9-6 over Geno Smith and the Jets. The Steelers have done a solid job in terms of numbers in the first half, but have been able to crack the end zone, despite a drop from Antonio Brown that should have been a TD.

Some quick halftime thoughts from the game:

1. Ben looks as good as any game this season – He’s been sacked a few times, but Ben Roethlisberger looks solid throwing the ball, and it should be a bigger lead if not for the drop by Brown that should have went for six. He’s 14-for-18 for 155 yards with no turnovers. The line has let him get sacked twice, but the bottom line is he’s doing his job thus far in 30 min.

2. Defense looks solid – Dick LeBeau has held Smith and the Jets in check, with the only bad drive being the late one that allowed the Jets to kick a field goal. If the defense plays as well over the last 30 min as they have in the first 30, the Steelers will have their first win of the 2013 season.