What The Steelers Are Saying About The Ravens 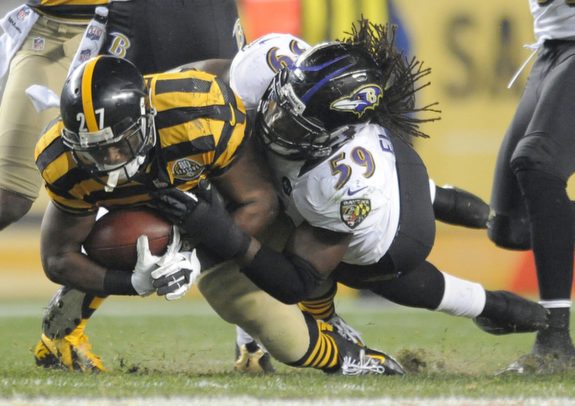 Ben Roethlisberger On Facing Baltimore for the First Time Since 2011:

“It was painful (sitting out),” he said. “I know it sounds crazy, but I enjoy two of the best teams going at it. (But) I don’t know if it was as painful as (if) I would’ve played.”

“For me, and I think if you asked him he’d say the same thing, it’s genuine respect. I respect him. I respect the way he plays the game. He plays it hard, he plays it physical, but he also respects the players. If he hits you and he hits you hard, he’s going to love it but he wants to make sure you’re okay because he wants you to keep playing, because he wants to keep hitting you. He doesn’t have this dirty attitude that a lot of these young guys coming into the league at linebacker and defensive players have. He’s got a respect for the game and the players, and I respect that.”

OT Kelvin Beachum On the Rivalry:

“It’s still a big rivalry. We hate those guys and they hate us.”

“It doesn’t matter. The point was brought up to me by [the] Baltimore [media] that there’s no Ray Lewis, there’s no Ed Reed, is it still the same? It’s still the same rivalry. There just might be different people in it. [Terrell] Suggs is still over there. [Haloti] Ngata is still over there. To us, and I’m sure they’re saying the same thing, it’s still Baltimore-Pittsburgh.”

Mike Tomlin on the Rivalry and Records going in:

“I don’t think records are as important in this game from an intensity standpoint. If nothing else, I think it heightens it. There’s a certain sense of urgency based on the position that the teams are in I’m sure.”

Tomlin on the Ravens Being Different from Past Seasons:

“I really haven’t sat down and thought about comparing it to what it’s been in the past. It’s a waste of time as I sit here today. It’s about preparing for it in its present state, with the components that are playing in its present state. They are very impressive. [Elvis] Dumervil has been added to this series now. We’ve got to look at the things he’s capable of, the positions in which they put him in, and how to utilize him. There’s Daryl Smith and, of course, the talented safety tandem. There’s a lot on 2013 tape for us to be concerned about and have to prepare for where we don’t need to waste our time thinking about years past.”

Tomlin on Both Teams Having Issues Running The Ball:

“We’re at the very early stages of the season from a rushing and statistical standpoint. We are where we are at this point. We desire to be better, but I don’t think it defines us. I’m sure that is their mentality, as well. I’m sure it’s not going to change the attention of the two teams with how they formulate plans.”

Roethlisberger On The Difference in the Ravens D:

“To us, they’re the same defense, just different personnel. [Terrell] Suggs is still coming off the edge, [Haloti] Ngata is still in the middle, and they’ve added Elvis [Dumervil]. It’s still a very good defense, just with different people.”

Roethlisberger On if the Steelers will be back in the Playoff Picture With a Win:

“We’re not worried about contention. We’re just trying to win one game and that’s this week – that’s our focus. It’s an AFC North opponent, which adds a little extra. It being the Ravens, the rivalry and the Super Bowl champs – it adds even more.”