What The Ravens Are Saying About The Steelers 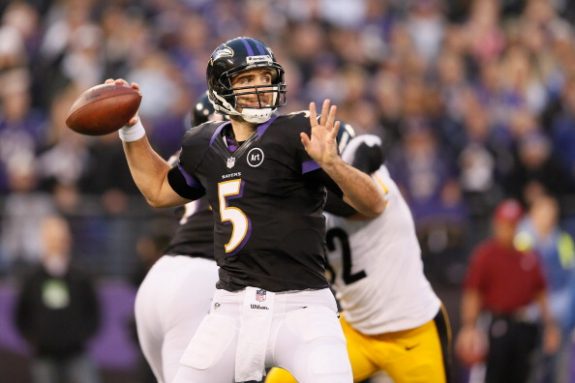 “He’s Big Ben. You can’t do anything but respect a guy like that and his physical play.”

Suggs Says The Game Is Good For the League:

“The whole NFL will be watching because there is not a rivalry in football like this.” Even this season? “(It’s) the history of those two teams, the rivalry and the style of play. This game is good for not only the NFL, it’s a good sporting event.”

“Their record isn’t showing how great a football team they are.”

Coach John Harbaugh on Heinz Field Being a Tough Place to Play:

Harbaugh On Getting Young Guys To Become Leaders:

Suggs If the Ravens Have a Super Bowl Hangover:

“No, but we’ll leave that for you all to decide. We really don’t get into that here. Our season is pretty much week-to-week and we’re just taking it as is. We’re 3-3. It’s not good but it’s also not terrible. We got some things we need to work on.”

Suggs If He’s Taken on a Different Role Losing Ray Lewis to Retirement:

“I don’t think so. I’m just going to be Terrell. No, we don’t have the guy that gives the emotional speeches before the games, but I’ve said it before, we have tons of leaders on this team and we’re going to continue to build and work.”