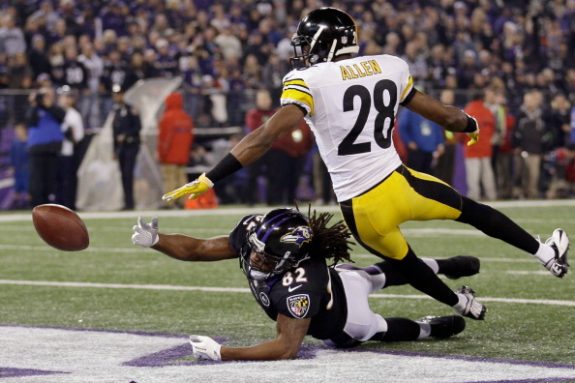 The Steelers did what they had to do last week vs the Jets to get their first win, putting together a solid defensive effort and enough on offense for a 19-6 win.

The team now will get a shot at a much better team, and a bigger stage, as they take on the Champion Ravens in a late afternoon game that will have a lot of eyes on it.

Here’s our official preview for the matchup with the Ravens, and who we think will walk away with a win.

1. Pressure On Flacco – Joe Flacco is going to be the focal point of the Ravens offense, and the best way to beat him and beat the Ravens is to make him uncomfortable with pressure in the pocket. Flacco can move around, but does not have the footwork to be able to escape pressure. Last week the Steelers got to and hit Geno Smith often, and it resulted in two picks and a win. If they do the same against Flacco, they will win the game.

2. Big Ben Mistakes – Last season Ben Roethlisberger missed the two games vs the Ravens, but overall has been pretty average at best, throwing for just 54.9 percent of his attempts for an average of 259.8 yards with six touchdowns and seven interceptions in his last six regular-season meetings with the Ravens. It’s time for him to step up and make some big downfield plays against the Ravens, and also avoid the mistakes that will give Baltimore short fields.

3. Don’t Get Down – The Ravens last season took the crowd out of the game after the Steelers took a 7-0 lead, but you knew that the game for the most part belonged to Baltimore. The Steelers can’t let that happen. The fans want to have something to cheer about from the opening kickoff to the final buzzer, it’s up to the players to stop the Ravens and give the fans what they want. The Steelers haven’t won two in a row in 13 games, a disgrace. That’s got to change and they have to not play catch up all day.

Prediction – The Steelers will try to avoid their fourth straight regular-season home loss to the Ravens, and it’s a critical game for so many reasons, maybe the biggest of all just being confidence. The club has to play sound football, the Ravens haven’t looked nearly as good, or as aggressive as last season, and the Steelers have to be physical and beat the Ravens up front. They can and I think they will do it, doing enough through the air and enough on defense to get the job done. Steelers 23 Ravens 13