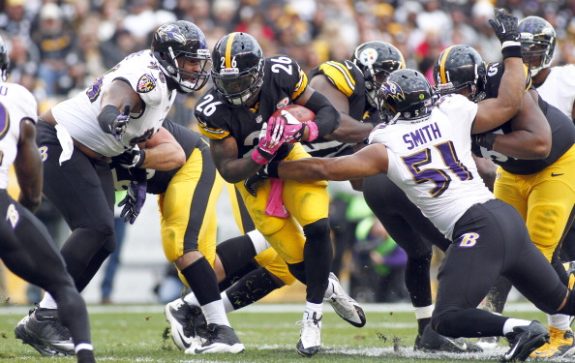 The Steelers played their best game in a long time on Sunday, and while it wasn’t pretty or a blowout by any means, it was a win – a big win – 19-16 over the rival Ravens.

The win wasn’t sealed till the final play, when A 42-yard field goal by kicker Shaun Susiham gave the black and gold the three-point win.

It was the second straight win for the Steelers, and puts them right back in the thick of things in the AFC North.

“That’s what we’re supposed to do,” Suisham said. “Hopefully we can start stacking wins here.”

The victory was the first over the Ravens in three seasons, and it finally showed they can hang with a team that other than a win last season in Baltimore has beaten the Steelers 3 of the last 4 times out.

Suddenly now at 2-4, the Steelers look like they again can be a factor in the AFC North race.

“At 0-4, a lot of people counted us out and we still have an opportunity to turn this thing around,” linebacker LaMarr Woodley said. “Right now we just have to keep marching in the right direction.”

The Ravens fall to 3-4, and the Browns also lost Sunday, falling to 3-4. The Bengals beat the Lions, and are now 5-2, the best team in the division.

Back to the Steelers, they were aggressive pretty quickly, confusing the Ravens with a run game that was better than at any point in 2013.

Bell put up 93 yards on 19 carries, and played like the running back the Steelers drafted. He waited for and found holes, and hit them when they were there.

Give credit as well to an offensive line that had some injuries, they had to play Mike Adams more than once after they lost Marcus Gilbert to injury, and veteran Guy Whimper played as well.

Ben Roethlisberger went 17 of 23 for 160 yards and a touchdown. He was solid on the game-winning drive after Baltimore tied the game up.

He hit Antonio Brown twice on Pittsburgh’s final drive, putting Suisham into range to hit the 42-yard field goal to get the win.

“You have to have confidence and I want the guys to see the confidence from me,” Roethlisberger said. “We need to have all the confidence in the world that we are going to go down and win this game.

“I think everyone believed it. I think it is big when everybody buys into what you are doing and we did a good job of that.”

The Steelers were 7-for-12 on third down, and that was helped out by the fact they got chunks of yards early in drive.

It was a total team effort, and one that everyone on the team should be proud of.

Next Sunday comes another interesting test, as the team goes to a place they never play well – Oakland.

Video: Mike Tomlin Talks About The Win Over The Ravens
Steelers Vs. Ravens Report Card